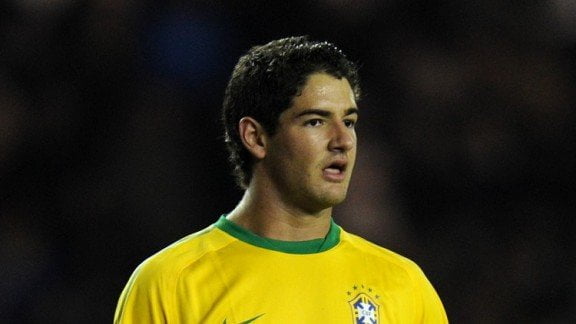 Pato ‘so happy’ to join Chelsea

Alexandre Pato says he is “so happy” to be joining Chelsea after the Brazilian forward arrived in London ahead of his loan move to the Barclays Premier League club.

While Chelsea are yet to comment on Pato’s proposed switch from Corinthians to Stamford Bridge, the former AC Milan forward described Chelsea “as my new home”.

Pato’s arrival in the capital coincided with Chelsea announcing that midfielder Ramires had ended his five-and-a-half-year stint with the club after joining Chinese Super League side Jiangsu Suning.

Pato, 26, is reported to join Chelsea on loan until the end of the season with a view to a permanent switch.

“I am so happy – Chelsea is my new home,” Pato told Sky Sports News. “Thanks Chelsea for the support and thanks for my fans and my Instagram, Twitter and Facebook followers.

“I need to play. I don’t know what to say because I am so happy. I am very anxious. I want to know my new friends, the new players, and the team. I really want to play for Chelsea.”

Pato, who has been capped 27 times for Brazil, but has not played since November, is reported to undergo a medical at Stamford Bridge later on Wednesday.

The Brazilian will not line up alongside countryman Ramires in west London, with the midfielder heading to China after agreeing to join Jiangsu Suning.

Ramires made 251 appearances for Chelsea after arriving from Benfica in 2010 and scored in the second leg of their Champions League semi-final in Barcelona in 2012.

While Ramires was suspended for the final, the Blues subsequently went on to beat Bayern Munich to win the tournament for the first time.

The 28-year-old will link up with former Chelsea defender Dan Petrescu in China. Petrescu, who played over 200 times for the Stamford Bridge club, is the manager of Jiangsu Suning and last year guided them to victory in the Chinese FA Cup.