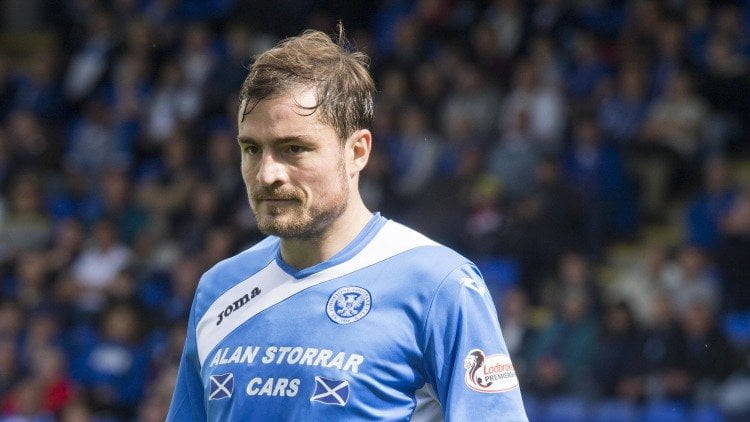 Paul Paton reckons St Johnstone will face an Inverness side desperate to fight for Richie Foran on Saturday after the rookie boss bravely shouldered the blame for their nightmare Ladbrokes Premiership start.

But Paton, who will line-up for Saints at the Caledonian Stadium on Saturday, has been impressed by the way Irishman Foran has deflected blame away from his team by accepting responsibility for the loses.

The midfielder said: “I think they’re just on a blip. They still have the core of the team that did so well in the last few years.

“They have a manager in there that they obviously respect. He’s been a team-mate for a long time, so he will be close to the lads up there.

“I’ve met Richie a number of times and I’m sure he’ll turn things around. I think he’ll get it right.

“That takes the heat off the players and, for a manager to be willing to do that, I think the players will give their all for him.

“He’s showing leadership, even though he will know deep down it’s not all his own fault. But that means the players have no pressure on them going into this weekend.”

Paton was part of a Dundee United squad last term that got off to a slow start and never recovered.

But he does not think Inverness are on the same path to relegation.

“I don’t think they should be worried,” said the Northern Ireland international. “They have a lot of good players, a lot of experienced players.

“It’s a new manager they have got in with fresh ideas and I’m sure they will pick up results.

“It was a bit different last year at United. We lost a lot of our top players, but they seem to have kept hold of most of theirs. ”

Saints were given a 45-minute lesson last week as they shipped three first-half goals to Celtic.

They eventually grabbed two late goals to add a touch of respectability to the 4-2 defeat, but Paton is not worried a decent start, which has seen the Perth men hold Aberdeen to a goalless draw, beat Hearts in the Betfred Cup and win at Motherwell, has been spoiled.

He said: “It’s still been a good start to the season. We always knew it was going to be difficult playing against the top three from last year.

“But after playing Celtic you know it’s only going to get easier from there.”