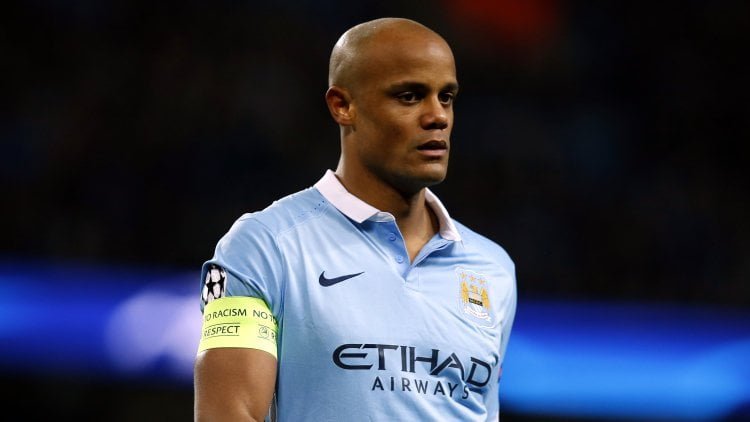 Manuel Pellegrini hopes to have Vincent Kompany back for this weekend’s trip to Chelsea, but will not rush the Manchester City captain back from his latest calf injury.

The influential defender was reduced to a watching brief on Tuesday as the Etihad Stadium witnessed one of the most memorable European nights in the club’s history.

Kevin De Bruyne’s classy finish ensured a 1-0 second-leg win, and a 3-2 aggregate victory, against Paris St Germain which propelled City into the Champions League semi-finals for the very first time.

It was a match Kompany was not risked for after sustaining the latest in a long line of calf-related problems in the last-16 clash with Dynamo Kiev.

However, the 30-year-old is back in training and Pellegrini hopes to have him available for the Premier League clash at Chelsea on Saturday, if not next Tuesday’s trip to embattled Newcastle.

“We will see (on Wednesday) and during the week in the way he improves,” the City boss said.

“I hope that Vincent can play on Saturday or on Tuesday.

“Now it is very important to do things with the Champions League (in mind).

“We are waiting for the draw, but now we have to play three games for the Premier League.

“For me, it is very important to try and qualify for the Champions League for next year.

“So we will see in which of those games Vincent will return to the team.”

Kompany’s absence on Tuesday saw Pellegrini plump for the same side that drew the first leg 2-2 in France.

Yaya Toure missed the trip to Paris with a knee complaint, but played 30 minutes of Saturday’s win against West Brom and was a somewhat surprising omission from the second-leg starting line-up.

“Yaya didn’t start the game because he worked just two days before the game against West Bromwich,” Pellegrini said of the midfielder brought on in the 84th minute.

“It was around 15 days since the last game he played against Manchester United.

“After that came the international break and Yaya stopped because he has an injury, his knee with some problem.

“He just worked two days before West Brom. He was not able to play 90 minutes.

“I think that it was more important to have him fresh for the last I don’t know how many minutes.

“I think that the team was playing very well until the end.”