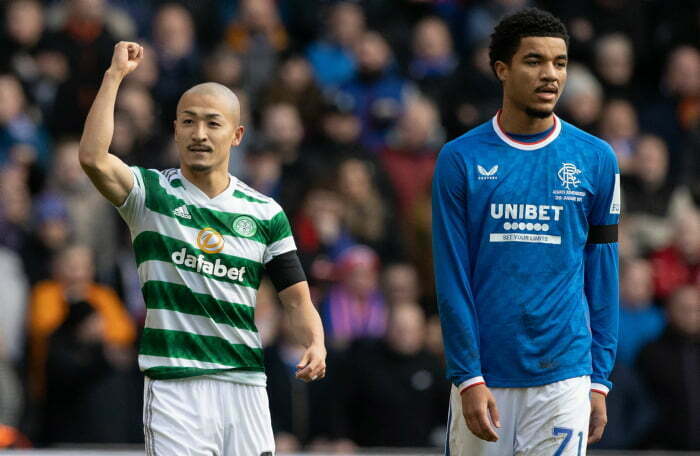 By Blair MalloyJanuary 2, 2023No Comments

Rangers and Celtic faced off in the opening Old Firm clash of 2023, with Michael Beale sitting in the Ibrox hotseat for the first time on derby day.

Ange Postecoglou made something of a surprise selection from the start, with Canadian international Alistair Johnston coming in for his Celtic debut at right back. Meanwhile for the hosts, Alfredo Morelos made the starting XI after an injury scare midweek.

The Colombian was at the heart of the action in the opening minutes, however it wasn’t in the way his new manager would have wanted. The forward’s loose ball in the centre of park was picked up by Daizen Maeda, who drove at the Rangers defence before slotting a composed finish beyond Allan McGregor.

The hosts’ slack passing continued to put them under pressure, with Celtic dominating the midfield battle as the had the run of the Ibrox park.

Joe Hart almost undone all of the work of his teammates in front of him on the half hour mark. A slack pass from the goalkeeper was capitalised on by Morelos, who eventually teed the ball up for Ryan Kent to have a strike on goal. Former England goalkeeper Hart soon redeemed himself however, producing a strong one handed save to deny an equaliser.

Morelos had Rangers’ best chance of the half, minutes before the break. James Tavernier found the striker free with a corner, but he could only send his header over the bar.