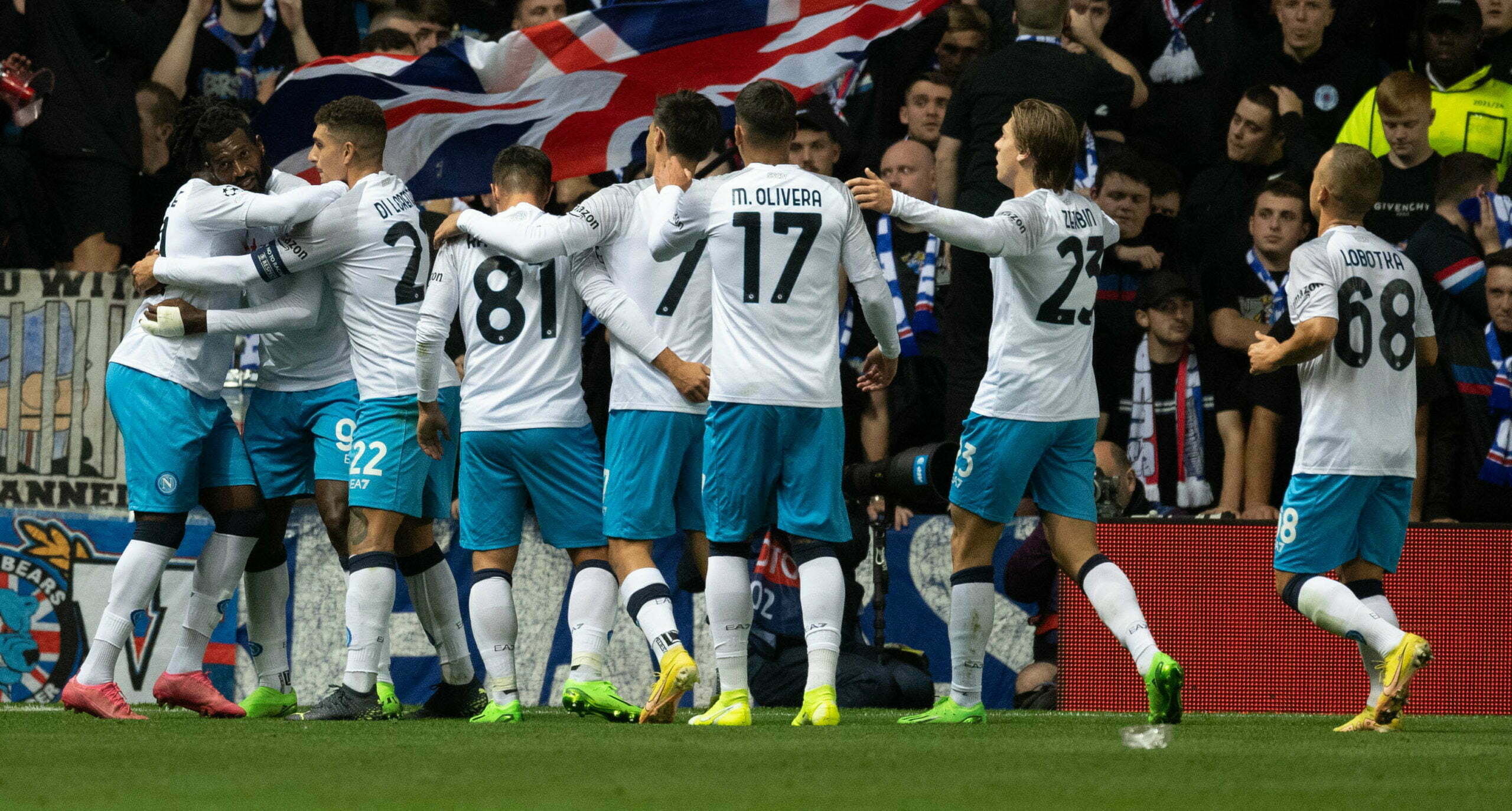 Ten-man Rangers went down 3-0 to Napoli after a dramatic second half, against the backdrop of an emotional Ibrox stadium paying tribute to Queen Elizabeth II.

A Matteo Politano penalty before goals from Giacomo Raspidori and Tanguy Ndombele seen Napoli go top of Group A, after James Sands had been sent off and the returning Allan Mcgregor had made two further penalty saves.

The Broomloan Road stand unveiled a Union Jack display whilst the stadium observed a minute’s silence before defying a UEFA ruling and giving a rendition of God Save the King in lieu of the traditional Champions League anthem.

Alfredo Morelos was a surprise inclusion in the starting line-up following his absence from the team due to ‘attitude issues’ and he almost lifted the roof off within 15 seconds when his header flew just wide of goalkeeper Alex Meret’s right hand post.

Only a minute later and Napoli proved that the atmosphere was not going to intimidate them as Polish playmaker Piotr Zielinski struck the post as the game somehow remained goalless.

Rangers came out of the traps flying in the opening minutes, Scott Arfield stung the palms of Meret from 20 yards after a flowing break from the home side.

Napoli then carved out their own golden opportunity as Giovanni Simeone darted through the home defence only for his shot to be deflected out for a corner.

Morelos entered the book on the 20-minute mark for leaving a boot hanging when the goalkeeper had collected the ball, leaving the Colombian walking a tightrope with the majority of the game remaining.

The second half burst into life in the 54th minute when Napoli were awarded a penalty and Rangers defender James Sands was shown a red card after bringing down Simeone.

Zielinski stepped up and saw his effort saved by Allan McGregor only for Politano to slot home the rebound.

Var intervened however and the penalty was ordered to be taken again due to encroachment from the Napoli players. The drama wasn’t finished there though as McGregor saved Zielinski’s second effort which was cleared as the Ibrox crowd went wild.

10 minutes later though and the referee pointed to the spot again after Rangers defender Borna Barisic handled in the area. This time Politano took responsibility and narrowly beat McGregor to give the 10 men an uphill battle.

It took until the 85th minute for Napoli to add a second as substitute Raspidori guided a shot over the helpless McGregor.

The game was put to bed as Glen Kamara gave the ball away on the edge of his box and Tottenham Hotspur loanee Ndombele was on hand to sweep a third past the unfortunate Mcgregor.

Rangers thought they had a consolation penalty of their own in the dying embers of the game but it encapsulated their luck on the night that VAR intervened, and the home side were denied the chance of a goal.