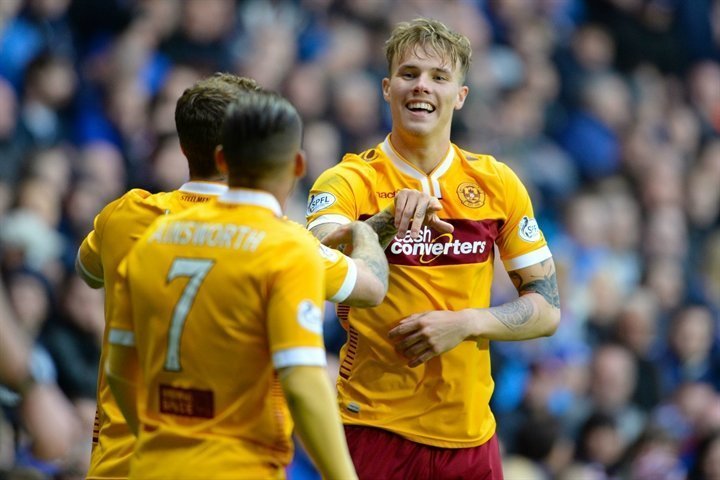 Rangers face an uphill battle to gain promotion to the Scottish Premiership after a stunning display from Motherwell ensured they will hold a precious 3-1 lead heading into the second leg at Fir Park.

Lee Erwin’s deflected effort opened the scoring for the Steelmen and Stephen McManus doubled the advantage before half-time guiding a header into the corner.

A minute after half-time, Lionel Ainsworth’s effort on the counter looked to have killed the tie but the roar that followed Darren McGregor’s late header suggests that Rangers fans believe this is far from over.

The atmosphere crackled at a packed out Ibrox and a red flare burned brightly amongst the 950 visiting fans but there was little in the way of goalmouth action in the early stages.

However, Kenny Miller almost had the Rangers fans to their feet but he couldn’t apply the finish after a fine solo run.

Motherwell sat deep, inviting the hosts on to them and a mix up in the Steelmen’s defence between Keith Lasley and McManus presented an opportunity to Nicky Law, who forced a fine save out of Long.

Suddenly though Ibrox was stunned into silence as the visitors took the lead. Lee Erwin was up against Mariius Zaliukas cut inside and slammed a shot which took a deflection off McGregor to put the ball beyond Bell.

The goal settled Ian Baraclough’s men down but Rangers still looked menacing going forward. Long had to pull off a terrific double save firstly to deny McGregor with a header and then Clark with the follow up.

Long’s heroics were to prove invaluable as at the other end Well doubled their lead. Marvin Johnson’s wonderful delivery was guided into the corner by the head of McManus to send the travelling support into raptures.

Rangers fans roared their team on as the second half kicked off but incredibly they found themselves three behind.

Pearson did superbly to intercept the ball from Andy Murdoch in the middle of the park, surged forward played in Erwin, the striker’s reverse pass into Ainsworth was perfectly timed and he drilled the ball under Bell.

The third goal signalled a change for the Light Blues with Walsh replacing the ineffective Shiels and the winger’s first involvement was to swing a ball in for Clark whose header flashed over. That was his last chance to make an impact and Boyd replaced him.

The Steelmen should have inflicted further damage moments later. Johnson’s trickery caused the hosts all sorts of problems his cut back fell for Ainsworth who blazed over.

At the other end Boyd’s header looked destined to hit the back of the net but Long made another fine save.

Rangers continued to pile on the pressure in search of a way back into the tie and McGregor gave them a lifeline powering a header beyond Long.

There were further scares towards the end for Well, with Vuckic coming close before McManus almost put through his own net, but in the end they held on and have a crucial lead to take with them to Fir Park on Sunday.