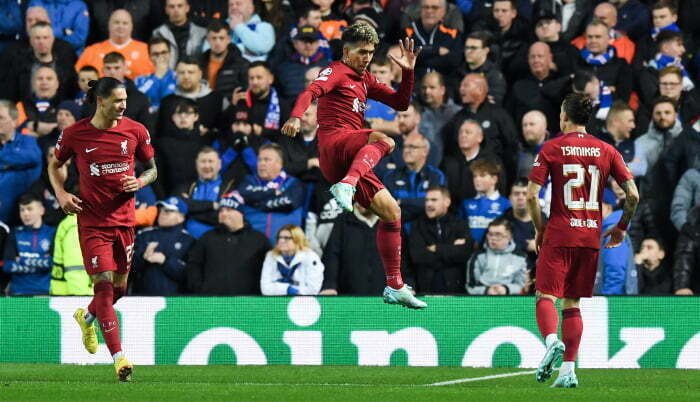 By Cheryl SmithOctober 12, 2022No Comments

Rangers started the night on top with an opener from Scott Arfield but SEVEN goals from Liverpool saw the Scottish side put to the sword in the Champions League.

Connor Goldson was forced off through injury in the first half, to be replaced by 18-year-old Leon King. Goldson was then spotted on crutches at half-time in a crushing blow to Rangers.

The sides went in all square at 1-1 at the break after Scott Arfield’s opener was cancelled out by a header from Bobby Firmino.

The Brazilian then scored a second on the 53rd minute to give Liverpool a 2-1 lead.

Joe Gomez played the ball across the face of goal for Firmino to tap in through the legs of Allan McGregor to give Liverpool the lead.

Rangers were dealt another injury blow on the 56th minute when Ryan Jack was forced to leave the field – and he was replaced by Steven Davis.

Liverpool made it 3-1 on the 66th minute with a superb finish from Darwin Nunez after being set up by a world class flick by Bobby Firmino.

Substitute Mo Salah fired in a fourth for Liverpool on 75 minutes after he poked the ball passed Allan McGregor to make it 4-1.

Salah fired in his second of the night to give Liverpool a 5-1 lead, before completing his hat-trick on 75 minutes to fire the Reds 6-1 ahead at Ibrox.

Before Harvey Elliot compounded Rangers’ misery with his first ever Champions League goal to make it 7-1.