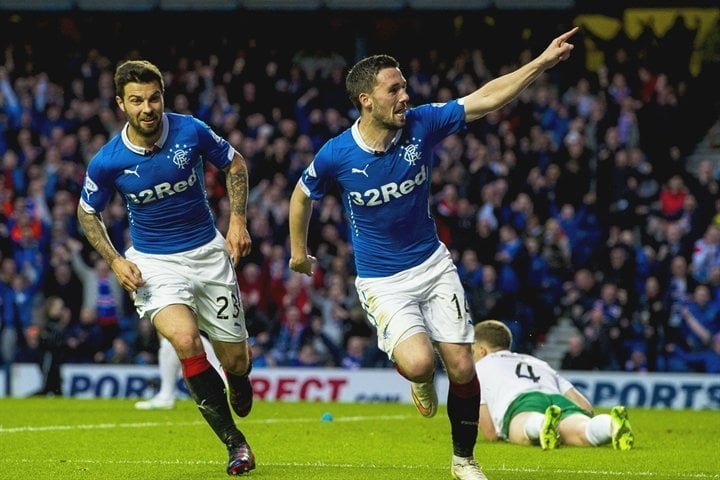 Rangers are in a commanding position in their Scottish Premiership play-off semi-final with Hibernian after a 2-0 first leg win at Ibrox.

Nicky Clark opened the scoring for the Light Blues, finishing off a slick move after audacious skill by Haris Vuckic and the supply by Ricky Forster to allow Rangers a 1-0 advantage.

Before that Hibs striker Jason Cummings missed a wonderful chance to put the visitors ahead when he was unable to convert from close range.

The victory was secured in the second half when Kenny Miller demonstrated great composure to slot under goalkeeper Mark Oxley after Lee Wallace’s flick on.

The result means Stuart McCall’s men have one foot in the final – to be played against his former club Motherwell – with the second leg at Easter Road on Sunday.

A day after South African-based business man Dave King was passed fit and proper by the Scottish FA to become the chairman of the club, Rangers also stood up to the test against Hibs though at times it looked as though they might struggle.

The home fans unfurled a motivational banner “Ibrox expects that every man will do his duty” and supported their team vociferously throughout but in the early stages Hibernian, fresh from their break in La Manga, had the better of the initial exchanges.

Liam Craig had Cammy Bell scampering towards his left post as he fizzed a shot wide before the midfielder had another attempt over the bar.

Hibs continued in the ascendancy and a lung-bursting run from Scott Allan deserved better as the chance eventually fizzled out.

Rangers first real effort on goal came from Miller after Nicky Law saw his initial effort blocked but Oxley was comfortably behind the shot.

At the other end, Cummings had a glorious opportunity to give his side the advantage but couldn’t convert Malonga’s cross from six yards out and the goal gaping.

It was a real let-off for Rangers and they punished Hibs just before half-time when Vuckic showed great invention to chip the ball into the path of Foster, who fired the ball across goal with Clark afforded a simple tap in.

Vuckic engineered space to have a right-foot shot as the hosts looked to extend their slender advantage but it was well dealt with by Oxley.

Rangers fans did their best to try to put Allan off as they pelted him with paper as Hibs forced a flurry of corners. Malonga was unable to divert his header on target when the ball did eventually come his way from one.

That was to prove costly as once again Rangers were clinical and found themselves two up when Miller latched on to Wallace’s flick on and slid the ball with the outside of his boot underneath Oxley.

Hibs continued to throw men forward in search of a way back into the tie but Foster almost made it three with a swerving, dipping shot which had Oxley worried.

The return leg leaves Hibs with a mountain to climb and McCall contemplating a final against his old side which if he succeeds could secure millions of much needed cash for the new chairman and the club, and more importantly a long-term future for McCall as manager.