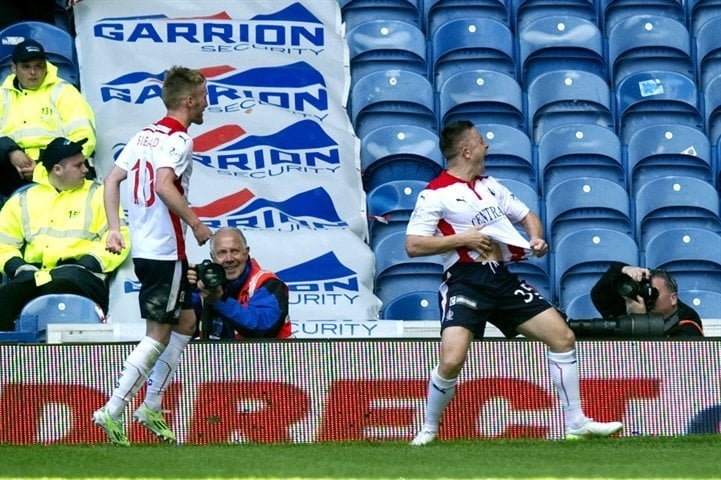 By Laura Brannan at Ibrox

Rangers’ Championship fate now lies in Hibernian’s hands as a 2-2 draw at home saw them slip to third in the table with one game remaining.

They now sit a point behind the Edinburgh side but it could have been more had it not been for Nicky Law’s stoppage time equaliser.

Falkirk looked to have secured the win with two second-half goals in four minutes but Haris Vuckic pulled one back before Law pounced at the death.

With just one game left of the campaign Rangers travel to Tynecastle next weekend needing to better Hibs’ result against Falkirk.

Peter Houston was pleased with his side’s two goals courtesy of John Baird and Tom Taiwo but was frustrated by the length of injury time added on.

“The whistle should have went before Jamie MacDonald had a world-class save to put it over the bar,” he said.

“The time was up, that was the time he’d allocated. But I thought we were playing well until Rangers scored.”

Baird added his annoyance, saying; “The referee said three minutes but I think everyone in the ground knew it was more than that.”

“It wasn’t the result we were looking for but I’ve got to say, I was delighted with the character, the desire and the togetherness the team showed,” he said.

“The overall feeling is disappointment we never got the three points but pride in the way we kept at it and went to the final whistle. We’ll have to do that until the last kick of the season.”