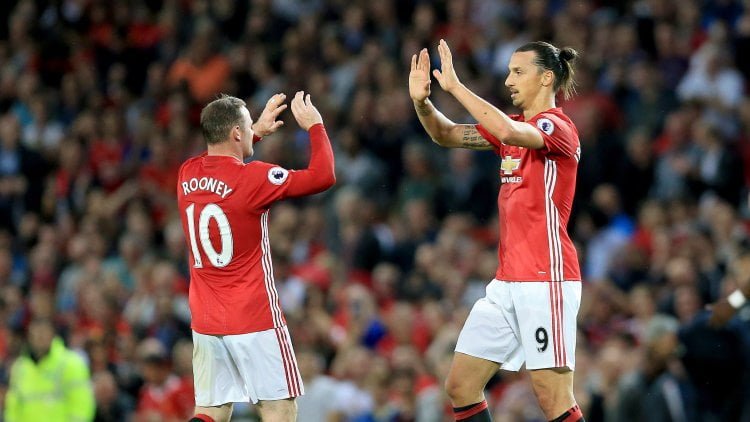 Rooney is the complete player for Zlatan

Rooney was widely praised after notching his 250th United goal to move clear of Sir Bobby Charlton – just as he was when breaking the World Cup winner’s England scoring record.

Yet despite such feats, the forward cannot shake off an undercurrent of antipathy from some and Ibrahimovic, widely appreciated as one of the finest strikers of his generation, struggles to understand why his team-mate is not cherished.

“But he works very hard, he’s got a good attitude and spirit.

“Everybody knows what Wayne is. But this country has to appreciate him.

“I don’t see any other strikers like him today. Give me some names. Tell me. And still you’re not happy.”

Rooney is not unequivocally loved like Charlton, but his impact for club and country is undeniable.

Where Rooney will fit in the pantheon of United greats is up for debate, but Ibrahimovic pointed to giants of the past when underlining the enormity of what he has achieved.

“It’s amazing,” he said. “He’s the top scorer of the club and I’m very happy for him.

“It’s a big thing you know – many great players have been here and his name is right on top.

“I’m very proud to have been on the same field as him when he did it and hopefully he can continue to do what he’s doing.”

Rooney’s memorable weekend continued on Sunday as the Football Writers’ Association presented him with the annual Tribute Award, recognising his outstanding contribution to the national game.

Jesse Lingard believes the forward deserves all the praise he is getting, saying United’s captain is an inspirational figure at Old Trafford.

“It’s an excellent record and for the young strikers coming through,” the home-grown winger said.

“Wayne has set a great example for them and we look up to him as a great leader and role model.

“It was mixed emotions, but we know it’s a great record that Wayne has set and it’s a great standard for the youngsters to look up to.”