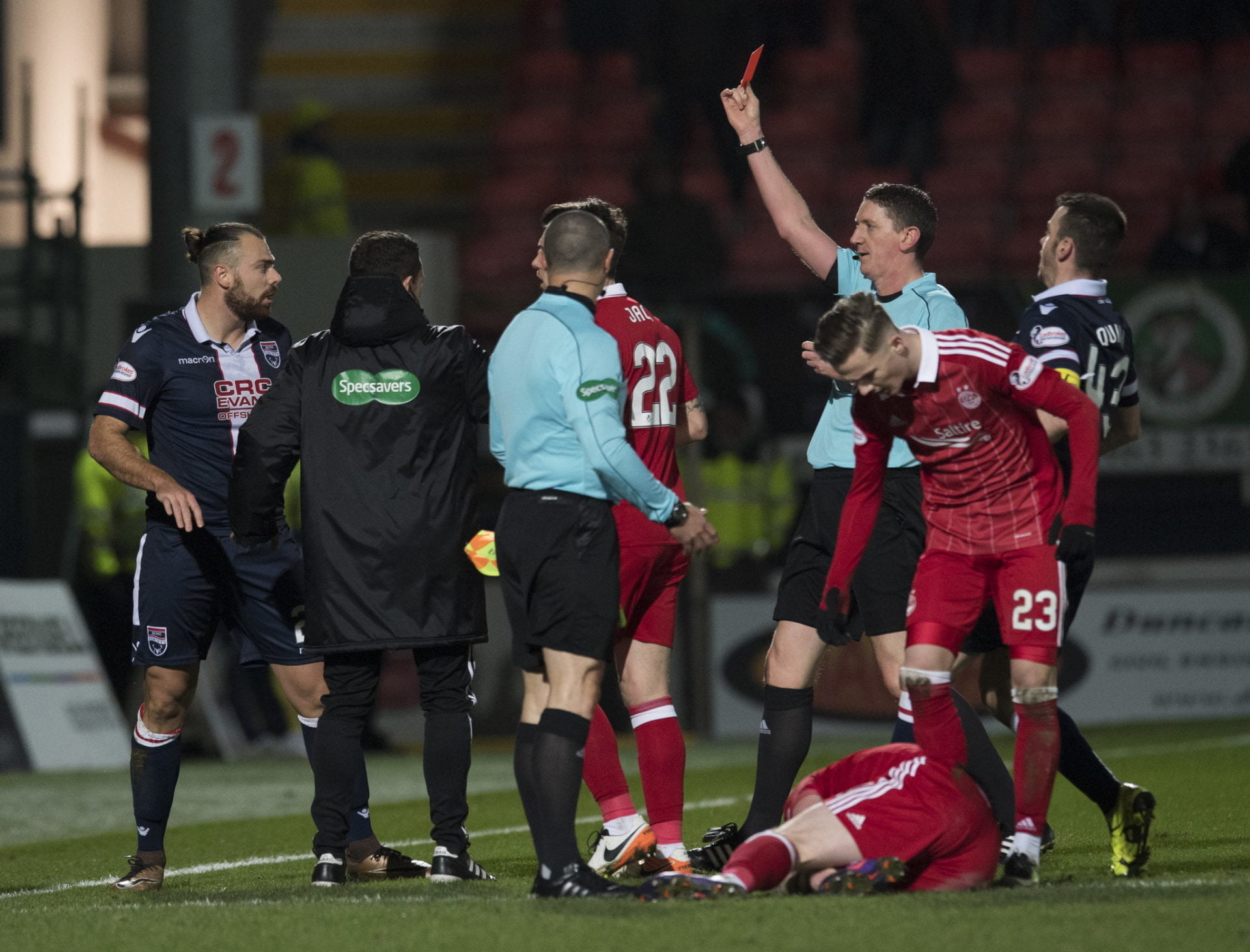 Dow, who replaced Tony Dingwall on the hour-mark, headed home from six yards to seal the victory a couple of minutes from the end.

Liam Boyce had given County a deserved lead in the 26th minute, but the Dons started the second half strongly and Niall McGinn levelled the scores.

Aberdeen won the first corner kick of the match in the fourth minute but James Maddison’s delivery evaded everyone on its way out for a throw in on the far side.

At the other end Christopher Routis lashed a shot from the edge of the 18-yard box just past Joe Lewis’ left hand post.

Lewis was called into action in the eighth minute when the ball broke to Dingwall inside the area and after his shot was parried, Dingwall’s follow-up was deflected wide for a corner.

Dingwall was seeing a lot of the ball early on and when he was set free by Boyce down the right his cross into the danger area was cut out by Shay Logan.

The match was being played at a high tempo with play swinging from one end to another.

The County goal came under threat in the 21st minute when Scott Fox had to look smart in turning away a long range effort from Kenny McLean, then an inswinging free-kick from Johnny Hayes a minute later was punched away by Fox.

Another long-range shot from McLean flashed over the crossbar but the breakthrough came at the other end in the 26th minute.

After good work from Dingwall, Routis slipped the ball out to Michael Gardyne whose shot across goal was tapped in at the back post by Boyce.

Gardyne was in on goal on the half hour mark but Lewis came off his line to put the midfielder off his stride.

It was end to end to end stuff and Graeme Shinnie got to the bye-line and whipped in an inviting cross which Maddison just failed to connect with.

The Dons won free kick in dangerous position after Tim Chow was booked for a foul on Maddison.

McLean took the set-piece and Fox had to dive full length to his left to turn the ball behind for a corner.

Aberdeen made an early change at the start of the second half with McGinn replacing Wes Burns in the middle of the park.

A high ball into the County box by Dons’ captain Ryan Jack fell nicely for Hayes at the far post but he ballooned his effort well over the crossbar.

Then Anthony O’Connor fired a 30-yard drive past the upright as the visitors well all out for an equaliser.

But it was all-square in the 68th minute when a Logan cross was dummied by sub Adam Rooney and McGinn gleefully hammered the ball home at the back post.

County were deduced to 10 men when Kenny Van Der Weg took out Hayes in the middle of the park and referee Craig Thomson had no hesitation in flashing a red card at the County defender.

But in a dramatic finish to the match County restored their lead when Andrew Davies headed down a Jonathan Franks cross and substitute Dow headed in from six yards.

The County goal came under sustained pressure in the dying minutes but the home side held out for the win.