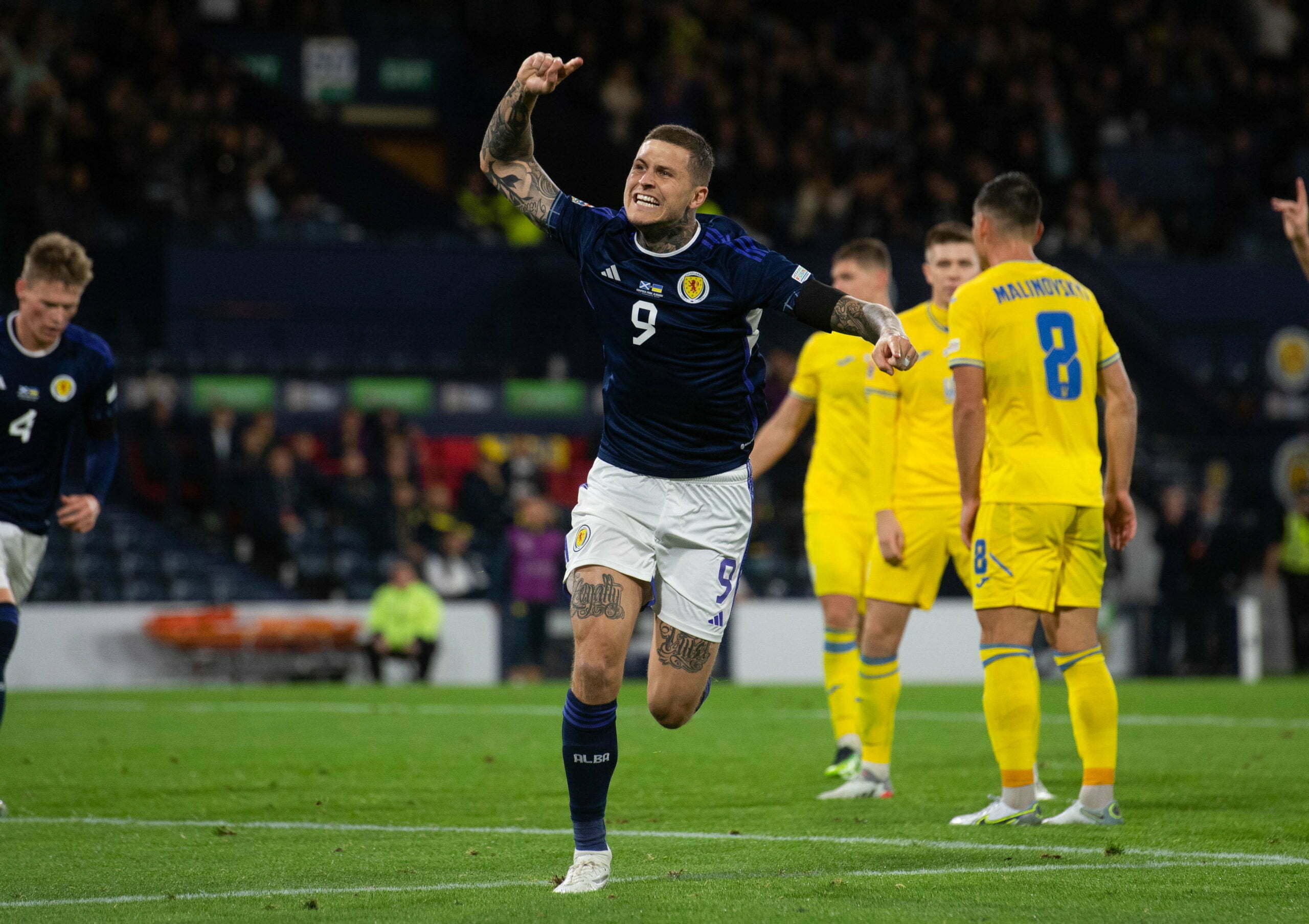 By Blair MalloySeptember 21, 2022No Comments

Lyndon Dykes hit a brace from the bench, after captain John Mcginn had put Scotland ahead, to give the home side a convincing 3-0 win over Ukraine which sees them top their Nations League group.

Steve Clarke’s men were looking to overtake their visitors in group B, putting them on course for promotion to the top tier and the possibility of a more direct route to Euro 2026.

The first glimpse of a chance came in the 12th minute when Ryan Christie flashed a ball across the face of the goal which was just out of reach of the arriving Che Adams.

Stuart Armstrong tested Anatoliy Trubin just after the 20th minute mark when his snapshot was parried away, the ball looked to be falling to Ryan Christie but the Bournemouth winger couldn’t adjust his feet quickly enough as the ball escaped him.

The home side were dealt a blow early as Nathan Patterson had to be withdrawn after 25 minutes. The Everton full back left the field on a stretcher after an ankle injury to be replaced by Brentford’s Aaron Hickey.

Mykhalo Mudryk was beginning to cause problems in the Scotland defence, his agile feet opening up space for Ukraine in the final third without creating any clear-cut opportunities.

Valerii Bondar entered the book for a cynical block on Che Adams, bringing a quick counterattack to a halt minutes before half time. The visitors may count themselves lucky not to be down to 10 men with the covering Matvienko behind Adams when he was body checked by the Ukrainian defender.

As the hour mark approached Stuart Armstrong got his second shot on target of the game, only to see the ball nestle in the arms of the grateful Trubin.

Moments later and Armstrong had another opportunity after some clever link up play with Scott McTominay, but the Southampton man could only blaze over the bar from inside the box.

Scotland were building in momentum, this time Aaron Hickey driving a shot towards goal only to see it deflected wide.

The home fans then saw forward Che Adams miss a duo of headers, the first of which coming back off the bar with the second being kept out by the feet of the Ukranian goalkeeper.

Stuart Armstrong was fast becoming the protagonist in this tale of wasted opportunity as he made it a hattrick of missed chances when he met an Adams cross only to head wide.

Scotland finally made the breakthrough after a sustained period of pressure, captain John McGinn showed excellent strength to hold off Bondar and drill a precise shot into the bottom corner.

Serial chance spurners Armstrong and Adams were withdrawn for Ryan Fraser and Lyndon Dykes on the 75-minute mark.

The substitution paid off immediately as Fraser found the head of Dykes from a corner for the forward to head into the bottom corner and double the home side’s advantage.

Steve Clarke looked on as his super subs combined again 5 minutes before the end for an almost identical goal to make it 3-0. Fraser again whipped in a corner for Aussie-born Dykes to get his second goal in 10 minutes – after waiting a year since his last in a Scotland jersey.

After much of the game where it looked like Scotland would rue a host of missed chances, three second half goals were nothing less than the hosts deserved in a dominant performance. They face Republic of Ireland on Saturday in pole position in their Nations League group.