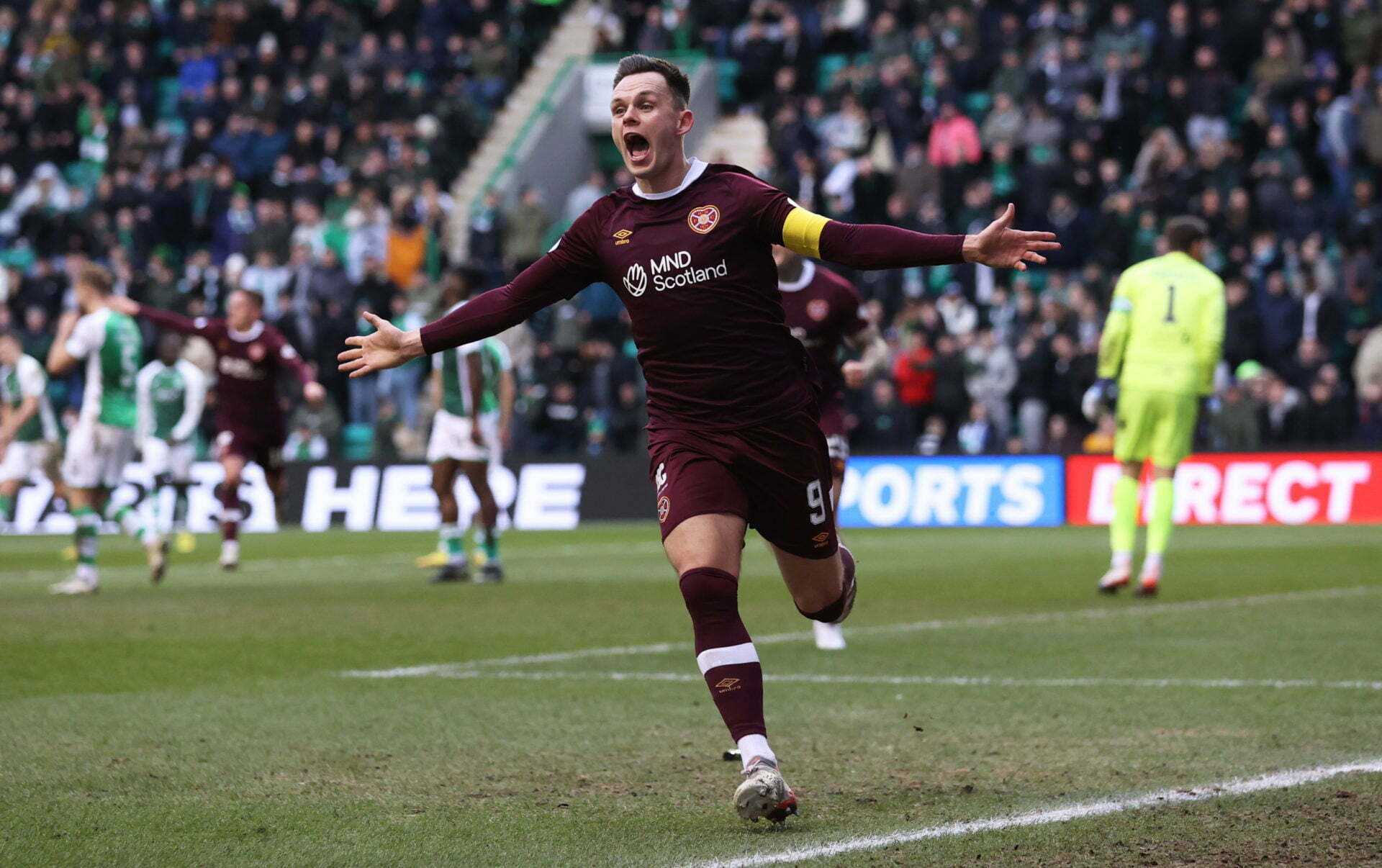 By Blair MalloyJanuary 22, 2023No Comments

Lawrence Shankland became the first Hearts players to notch 20 goals in a season since John Robertson almost 30 years ago, before picking up a late red card, to help dump city rivals Hibs out of the Scottish Cup with a 3-0 victory at Easter Road.

The stand-in captain flicked a clever ball into substitute Stephen Humphrys, who teed up for forward for a low volley into the far corner before sending the away fans into jubilation.

Shankland then picked a up a second yellow card as the game trundled into 8-minutes of stoppage time, for a late foul on Rocky Bushiri, taking the shine off of a memorable afternoon for the Jambos number 9.

There was yet more drama to come, as Hearts centre back Toby Sibbick led a counter attack deep into injury time, storming up the park and providing a composed finish beyond David Marshall to seal derby day victory.

It was the 40th time these sides had met in the Scottish Cup and from a Hibs perspective it will be a game remembered for a host of missed chances, with Aiden McGeady, Josh Campbell and Kevin Nisbet all passing up opportunities to land a glove on Hearts.

Robbie Neilson, who took in the game from the stands following his red card midweek, saw his side come into the game as favourites; the Jambos sitting clear in third in the table and recording a convincing 3-0 win in the last Edinburgh derby earlier in the month.

It was Hibs who had the first sight of goal when veteran winger Aiden McGeady worked space, before finding Josh Campbell whose clever flick came back off the post.

Despite a shaky start, Hearts soon flexed their muscles and silenced the home crowd with an early opener. Robert Snodgrass’ delicious free kick was headed away to the edge of the box where the ball broke to Josh Ginnelly who rifled a low volley beyond David Marshall.

Hibs were handing a debut to Australian midfielder James Jeggo, announced less than 24 hours before kick off, in a bid to add an experienced midfield anchor. The 30-year-old appeared to struggle with the early pace however and picked up a needless caution with just over 20 minutes gone.

Campbell then should’ve equalised for Lee Johnson’s men before half time. McGeady continued to cause problems for the Jambos, with the winger delivering a clipped ball into the back post where Campbell could only direct his header wide.

Hibs were coming forward in waves in the second half, with Zander Clark called upon to turn away Chris Cadden’s effort just after the hour mark.

Despite their second half pressure, Hibs were hit with a sucker punch with 20 minutes remaining. Captain Shankland played a clever 1-2 with Humphrys in the box, before slamming home his 20th goal of the season.

The second goal winded the home side and they were unable to find a way back, despite goal hero Shankland picking up a second yellow card late in the day for a tackle on Rocky Bushiri.

Hearts finished the cup tie in style., with Sibbick scoring an excellent breakaway goal to send the Hibs fans home disappointed and his side through to the Scottish Cup fifth round.