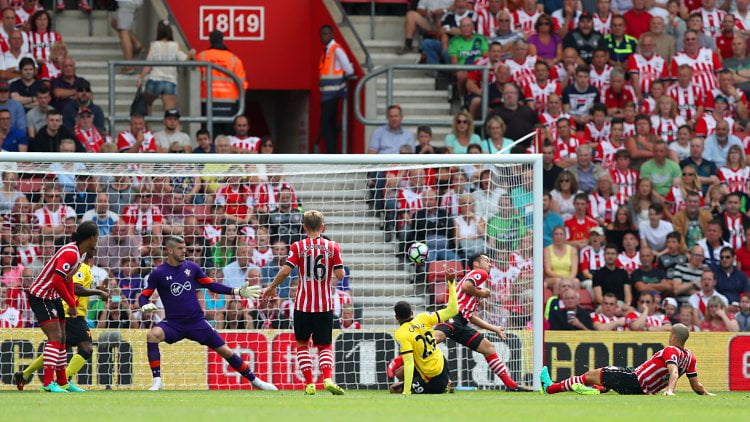 Nathan Redmond grabbed a debut goal as Southampton came from behind to snatch a 1-1 draw in the battle of the new bosses.

Watford chief Walter Mazzarri saw his new side take an early lead thanks to a first Hornets goal for Etienne Capoue.

But Redmond ensured Claude Puel came away with a point from his first game in charge of Southampton, while Watford played the final 15 minutes a man down after Ben Watson’s dismissal.

The opening day often throws up the odd surprise and the identity of Watford’s goalscorer was certainly one of them.

Despite his attacking tendencies Capoue did not find the net once last season, much to the amusement of his team-mates, but the former Tottenham midfielder took just nine minutes to get off the mark this term.

Southampton’s defending was a major strong point under previous boss Ronald Koeman but it was non-existent as Nordin Amrabat lifted a cross towards Troy Deeney at the far post.

Deeney was unmarked as he nodded the ball down towards Capoue, who took advantage of Oriel Romeu’s ball-watching to lash his shot past Fraser Forster.

By then Saints would have already been ahead but for a stunning double save from Hornets keeper Heurelho Gomes.

Dusan Tadic rifled in a 20-yard free-kick which was pushed away by the Brazilian, who then got up in time to produce another fine block to prevent a Miguel Britos own-goal.

After Capoue’s strike Southampton spent the rest of the first period camped in Watford’s half but Shane Long headed a Tadic cross off target and Portugal full-back Cedric Soares had a fierce drive beaten away by Gomes.

After the interval James Ward-Prowse’s shot was deflected narrowly wide before Redmond forced Gomes to tip his curling effort inches past the far post.

But from the corner the summer signing from Norwich notched his deserved debut goal.

Gomes came out to punch the cross clear, only to send it looping high in the air towards Redmond who volleyed it straight back past the keeper and into the net.

Watford sub Watson rightly saw red 15 minutes from time after cynically tugging back Long as the striker raced through on goal.

Redmond’s afternoon almost got even better with five minutes left when he slotted home what would surely have been the winner, only to be denied by a narrow offside decision.