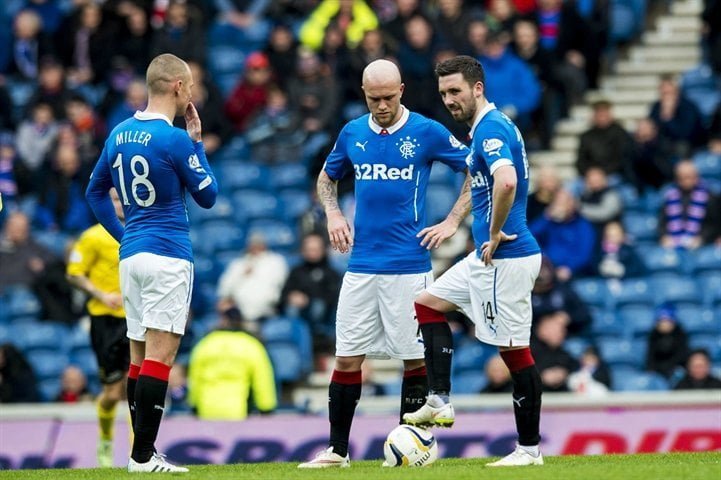 The Blame Game – Rangers’ shortcomings go way beyond this season

Congratulations to Motherwell on staying in the Premiership, as Lee Erwin put it so succinctly, “We battered them home and away,” when asked about their victory over Rangers in Sunday’s play-off final second leg.

There, that takes care of anyone accusing me of not praising Motherwell for finishing second bottom of the Premiership.

This match may well be remembered as a game of shame due to the disgraceful antics of one Bilel Mohsni.

He should be heavily fined for his attack on Erwin before leaving Scottish football forever and returning to lower league football in another country.

I will return to Mohsni later, because his shame is minute in the overall tale of who is to blame for Rangers remaining in the Championship for another season.

Ally McCoist and Kenny McDowall take the lion’s share for the displays week in, week out on the park. The performances throughout the season were dire and from a bygone era.

Route one football, summed up by a game at home against Dumbarton when Rangers took the kick off, the ball found its way to Lee Wallace and he immediately launched a 50 yard diagonal for a Jon Daly flick on.

I mean no disrespect to Dumbarton, but surely that can’t be the tactic against a lesser team.

It was no surprise to see Ally walk away in December with a substantial reward for failure.

Every week, I expected to see Rangers improve, but one positive result was usually followed up with another inept display.

The stories of the chaos that was going on behind the scenes beggared belief. It seemed everyone had to get their share of any money that was available, while the fans were being short changed on the park.

I never thought Rangers were going up to the Premiership this year, but Stuart McCall’s arrival sowed a little seed of doubt in my mind because he somehow managed to galvanise a team with very little quality.

Under his leadership Rangers won seven, lost four and had five draws. Two of the four defeats were back to back, home and away against Motherwell.

There’s a lot to be said for getting a team organised, but asking them to then play free flowing and winning football was beyond even McCall’s skills as a gaffer.

I am led to believe he won’t get the Rangers manager’s job. I hope I am wrong, because he deserves a chance at building his own team.

What a kick in the teeth to a Rangers legend if he doesn’t get it, when you consider what he inherited.

The list of people to blame for Rangers failure stretches further back than the start of the season, but naming all of them usually prompts a lawyer’s letter or two to keep most of us tied up.

The new board has a chance to make a clean sweep and start afresh in the summer. Let’s wait and see their appointment as manager and what the signing policy is before determining whether Rangers can flourish while still balancing the books.

The supporters will be hoping they don’t sign anymore like Mohsni. He wasn’t fit to wear the jersey, but on Sunday he also brought shame on Rangers Football Club by attacking a player on the park, and I am told he had to be restrained off it in the dressing room and elsewhere, long after the final whistle.

Erwin shouldn’t have pushed him after realising he wasn’t getting a sporting handshake; he will be punished too, but not as severely as Mohsni should be.

I’ve said on several occasions this season that the starting eleven would bear no resemblance to next season’s team. That has to be the case.

It is time for a clear out.

Stuart McCall, Kenny Black and the youngsters at Rangers are all acquitted in my book for the club’s predicament. The rest have to look in the mirror and ask did they give value for the money they took out of Ibrox?

Step forward and let me know if your answer is yes.

I am going to finish, as I started, on a positive note. Well done Motherwell, you got what you deserved, Premiership status.