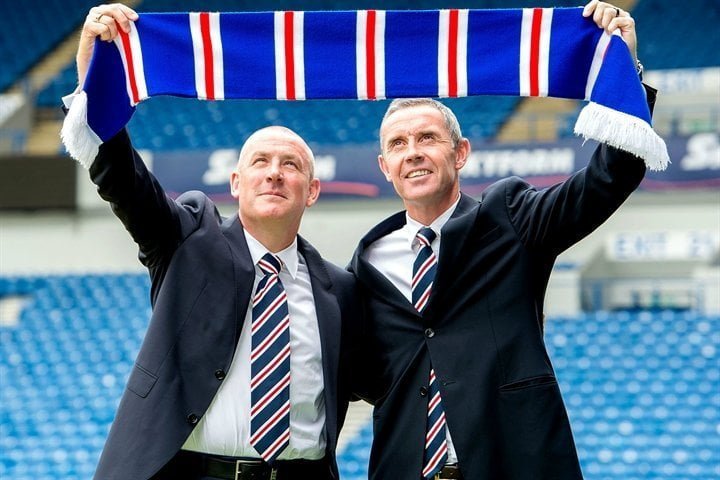 New Rangers boss Mark Warburton has targeted winning the Scottish Championship title in his maiden season but warned fans it will take time to get to the top.

The former Brentford boss, who has signed a three-year deal, was unveiled at Ibrox at a press conference on Monday alongside new no.2 David Weir, and has immediately began to plot a way to get the club competing at the top level in Scotland.

However, the 52-year-old, who took over from Stuart McCall after Rangers were beaten by Motherwell in the play-offs, has urged supporters not to expect a quick fix.

“Our aim is to win the division, that’s what you expect every manager to say. But it won’t happen overnight,” he said.

“There’s no point us sitting here lying to you and saying it’s going to happen in a week’s time. That’s not the case.”

Rangers released 11 first-team players earlier this month including captain Lee McCulloch, which has left them with a threadbare squad. There are only five weeks left before the start of the new season and Warburton’s first task will be to strengthen the pool of players he’ll have at his disposal.

“The ambition of the club is very clear: our job is to bring suggestions to the table – players who will add value to the football club.

“If we can do that then I’m sure we can go to the board and discuss it and I’m sure we will get the support we need … if they are the right players. But they have to add value on and off the pitch.

“I’ve looked at the squad over the last few weeks you can look at scouting platforms it’s important to look at them in more detail but I’ve got a idea of the playing squad right now I realise it’s quite lean.

“The works starts today for David and I to push forward and learn as much about the squad as quickly possible and make decisions.”

Warburton stressed his belief of the importance of youth being at “the heartbeat” of the club and says they must be given an opportunity to shine.

“A stat came out that last year we used the smallest number of players the whole season. I think we used 24 in total so we prefer tight, lean squads.

“The players have to have a pathway to see the first team there’s nothing worse than players training hard every day and not having a sniff of the first team.

Warburton’s path into management is somewhat unusual as he was a city trader before a change of career path led him into coaching at Watford before coming first-team coach at Brentford.

“I was no high-flying city slicker. It was more a case of working in tight, competitive teams of traders aged 19 to 35 years age.

“It was hugely competitive and testosterone filled, with people looking to earn money and be very competitive with what they do.

“That’s the same as a football dressing room, so there are many skills you can transfer from that trading environment into the football one.

“That proved to be the case at the old club and hopefully it will be the same here.”