By Peter MartinFebruary 15, 2016No Comments 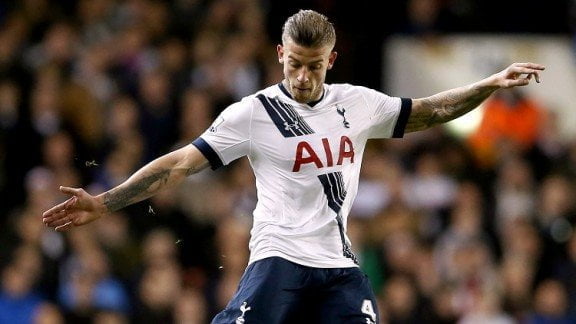 Tottenham defender Toby Alderweireld has stressed he and his team-mates must keep their concentration and not “dream too much” about the Barclays Premier League title at the moment.

Spurs moved up to second in the table, two points behind leaders Leicester, with Sunday’s 2-1 victory at Manchester City.

There are 12 rounds of games left to play and excitement is growing among the north London outfit’s fans about the possibility of a first league championship since 1961.

Tottenham boss Mauricio Pochettino said on Sunday “it is true that our supporters can dream” – although he also emphasised the need within the club for calm and continued hard work, adding: “It is too early to start to speak about the title.”

His words have been echoed by Alderweireld, who says there is a strong wariness inside the camp of the danger of getting carried away, and insists the primary focus is still just on finishing inside the top four.

“We have to work hard like we did (against City) and see game by game.

“It is a very big win for us, but we don’t talk about the title. Our goal is to reach the Champions League spots and I think we made a good step.

Tottenham opened the scoring at the Etihad Stadium via a 53rd-minute penalty controversially awarded when Raheem Sterling was penalised for handball, even though Danny Rose’s cross appeared to have only struck him on the back.

The spot-kick, converted by Harry Kane, was cancelled out by City substitute Kelechi Iheanacho’s strike in the 74th minute, but Spurs hit back nine minutes later as Christian Eriksen slotted in what proved the winner.

Pochettino’s men have been beaten only three times in the league this season and boast the division’s best defensive record, showing just 20 goals conceded from 26 games.

Centre-back Alderweireld, one of several star performers for Tottenham this term, feels the organisation of the side is key to their success, and he admits confidence is sky-high.

“We feel if we work very hard, with everyone doing their job, we can beat any team,” said the 26-year-old Belgium international, signed last summer from Atletico Madrid.

“It is not arrogance – we don’t have arrogance, we just have confidence, and that is the difference.

“In the first half we played very well, the second a little bit less.

“But in every game this season we have had good organisation, and even when things are not going the way you want, you can fall back on that organisation, and then try to go up front and make a goal, like we did this time.

“We have a good team that sticks together, and that is important.”