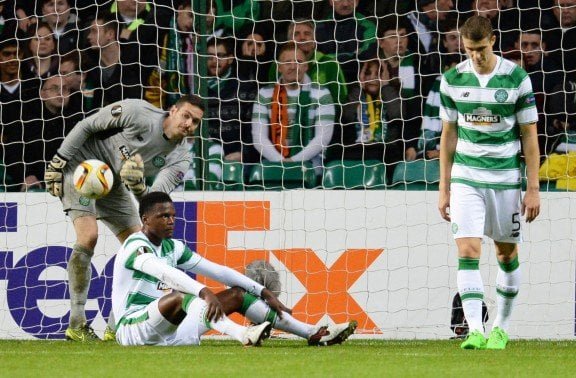 Celtic hopes of progressing from Group A in the Europa League were ended after a 1-1 draw with Ajax.

Celtic pushed for a second but were caught on the break as substitute Vaclav Cerny fired in the winner.

The Hoops needed to win to give themselves a chance of European football after Christmas but defeat has left them bottom of the group.

With Scott Brown, Kris Commons, Nir Bitton and Stefan Johansen all ruled out, Celtic lined up with an unfamiliar look about the team.

McGregor hadn’t played in Europe for over a year but seized his opportunity to impress as he opened the scoring for Celtic, slotting home with precision after just three minutes.

Ajax thought they’d equalised when Amin Younes found Viktor Fischer with a deft flick before he rattled the ball into the back of the net, but the German attacker was judged offside despite television replays appearing to show he was on.

The Dutch side were unperturbed by that misfortune and continued to search for an equaliser and it arrived midway through the first half.

Craig Gordon denied Fischer from close range – after Lasse Schone’s deflected shot looped in to his path – but the goalkeeper was unable to do anything when Fischer headed the ball back across for Milik to acrobatically force it over the line.

The goal briefly unsettled Celtic as Frank de Boer’s men continued to threaten and Younes came agonisingly close as he curled over just over the bar.

But the Hoops finished the half stronger and striker Leigh Griffiths was central to the action, first shooting into the side netting before attempting another effort which Jasper Cillessen was equal to.

After the break, Celtic had a couple of harmless shots through Griffiths and Forrest before Mulgrew came on for Rogic, and a McGregor deflected effort hit the bar.

Scott Allan came on in place of Mackay-Steven as Deila hoped for more attacking impetus and the switch nearly paid off with a tremendous pass into Griffiths who was denied by Cillessen.

It begged the question as to why Allan wasn’t on sooner as he was at the heart of everything good for the Scottish champions. He released Griffiths again before Mulgrew headed inches wide from Forrest’s delivery.

At the other end, Celtic were almost stunned when Younes cracked a shot off the post but worse was to come for the hosts as Cerny fired in the second on the counter.