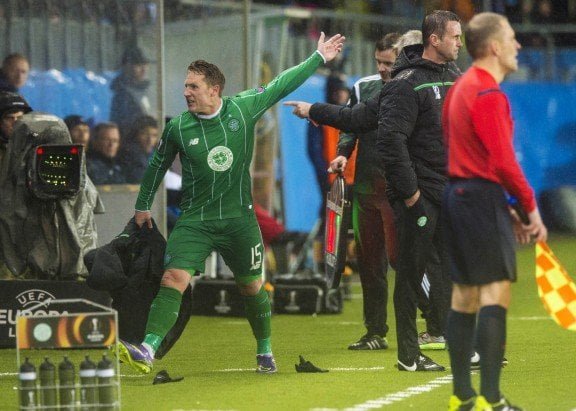 Celtic boss Ronny Deila blasted Kris Commons’ reaction to being substituted, describing it as “unacceptable” but says he still has a future at the club.

It completed a miserable night for Deila’s side who were humbled 3-1 by Molde in Norway to leave them bottom of Group A in the Europa League.

Commons had given the Hoops hope but was shortly replaced afterwards by Nadir Ciftci with the side trailing 3-1, and it was the catalyst for a volley of abuse sent in the direction of the visiting dugout from the midfielder.

Deila described Commons’ reaction as “disrespectful” and warned he won’t tolerate that sort of behaviour from any of his squad.

“It’s unacceptable. We are a team. I understand that players can be disappointed at being taken off but to show it that way is not how we want to have it at Celtic,” he said.

“It’s not about one player and it was very disrespectful to every one of us.”

Asked if Commons would be disciplined by the club, Deila said: “We have to talk about it. This is not about punishing people, it’s about understanding how we react and how we behave.

“He was irritated that he was taken off and that’s okay, sometimes you are irritated but you do it in a better way than he did.”

Deila explained his decision to take off Commons. “It’s always a matter of having balance between attacking and defending because you can’t just put on four strikers and think that you will create a lot of chances.

“You need someone who can defend as well so you can have the ball. We wanted to have two strikers on but we needed more balance in the midfield.

“Everytime they got the ball they counter-attacked us. There’s a lot of games coming up and Kris will be important in them.”

Celtic started bright but soon found themselves two goals down courtesy of strikes from Ola Kamara and Veggard Forren.

Commons halved the deficit but Mohamed Elyounoussi responded immediately to restore the two-goal cushion to keep Molde top of the group.

“We are very disappointed we didn’t perform at the level that we should,” Deila said.

“We started okay in the first five or ten minutes but then they scored. I think we were very uncomfortable on the ball and had a lot of touches and didn’t create anything.

“The game went the way they wanted it, they won the ball in good situations and counter attacked us. The first goal is important as they can stand back and wait for us but we should have created more.”

Deila still believes they can qualify but admits they’ve given themselves an uphill battle.

“It makes it much harder but we have two games now. We need to beat Molde at home but there’s still a chance so that’s positive. We need to win against Ajax too and then we’ll see what kind of position we are in then.”