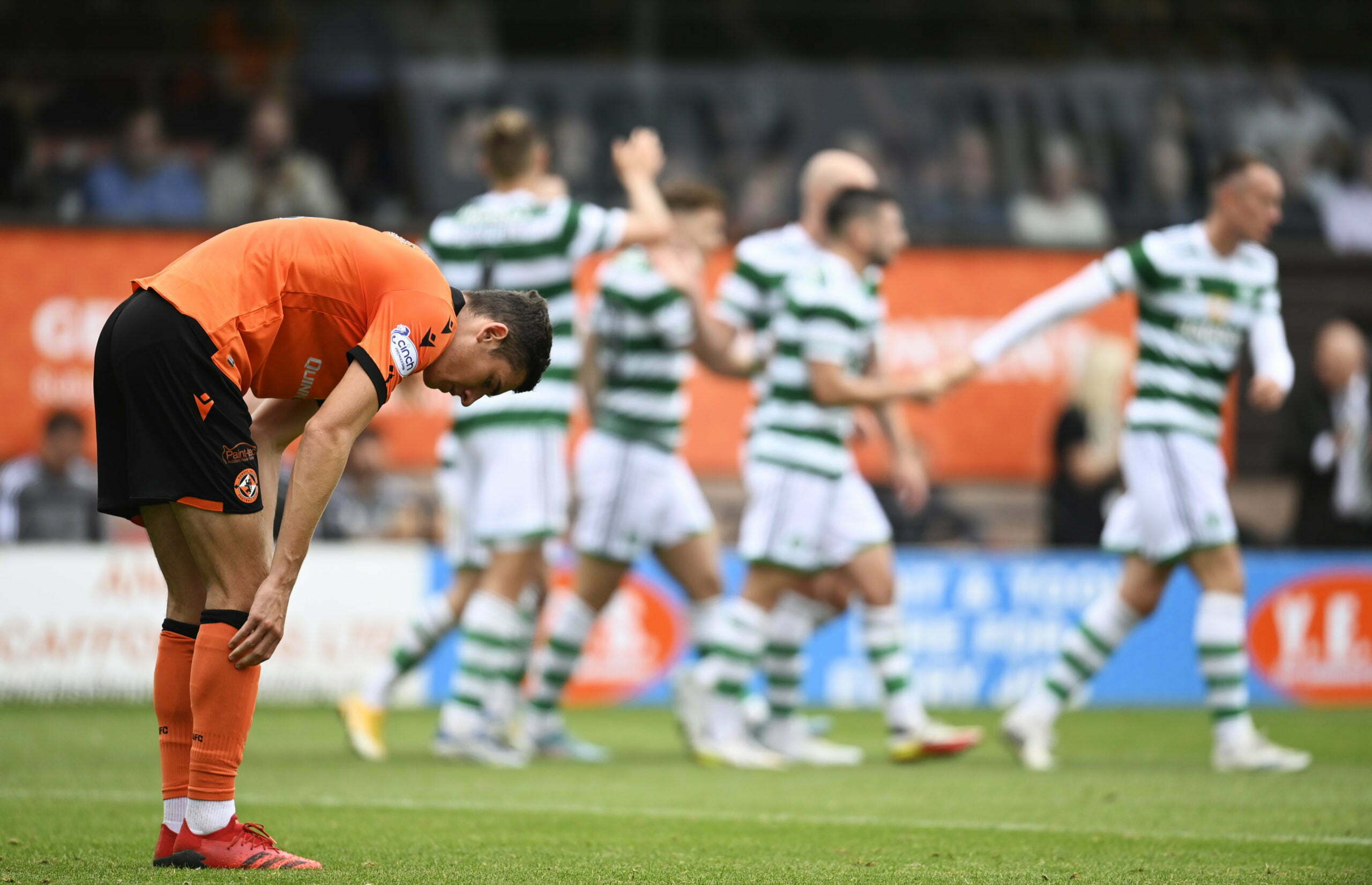 By Blair MalloyAugust 28, 2022No Comments

Celtic eviscerated a hopeless Dundee United side 9-0 to leap frog Rangers at the top of table and send an ominous message to the rest of the league.

Hat-tricks for both Kyogo and Abada alongside strikes from Jota, Juranovic and Starfelt made it 23 goals conceded in 4 games for Jack Ross’ men, whilst maintaining Celtic’s 100% start to the league.

Before the game got into full flow, an early Dundee United attack saw Joe Hart sustain a head injury via the boot of Steven Fletcher. The former Scotland striker made what appeared to be an honest attempt for the ball, resulting in a 7 minute stoppage whilst the medical staff treated the Celtic goalkeeper.

The stoppage did nothing to upset the flow of the champions however as they were ahead on the 15 minute mark.

A Jota led breakaway found the unmarked Kyogo Furuhashi in the middle of the penalty area, where the Japanese international buried his strike past Carljohan Eriksson.

Reo Hatate could’ve made it 2-0 moments later, were it not for a triple block from the home defence. Firstly from Ryan Edwards, then Liam Smith before the goalkeeper palmed the ball away to release the mounting pressure on his side.

Dundee United offered the occasional glimmer of hope to their supporters, with Glenn Middleton seeing his shot fly just past the post after Scott McMann had robbed Josip Juranovic on 33 minutes.

The away side soon flexed their attacking muscles once more though, as Kyogo got his name on the scoresheet again 5 minutes before the break. The forward latched on to loose clearance from McMann and found the top corner with a curling first time effort from 25 yards out.

Two minutes into the 7 added on, after the injury to Hart, and Celtic further extended their lead. An inch perfect pass from Matt O’Riley found Liel Abada, who squared the ball to Kyogo to complete a first half hat-trick.

Celtic weren’t finished there though and they found time for a fourth before half time. Jota popped up at the back post to tap in a square pass from O’Riley, despite the Portuguese looking offside.

The second half was only 4 minutes old when Liel Abada made it 5-0. The influential O’Riley once again provided the assist, this time for the Isreali to score his 3rd goal in 5 matches against United.

Some Dundee United fans decided they has seen enough when full back Juranovic made it six. The Croatian got on to the end of a Jota free kick that had come back off the wall and picked his spot past Eriksson.

Liel Abada got back on the score sheet again on the hour mark. A low ball across the penalty area, with which Celtic had found so much success, left the winger with a tap in to make it 7-0.

Not to be out done by Kyogo, Abada then got a hat-trick of his own to put Celtic 8 goals in front before the clock struck 80 minutes. Substitute Daizen Maeda rolled the ball across the box for Abada to cleverly lift the ball over the advancing Eriksson.

Dundee United then completely capitulated as, less than a minute later, Carl Starfelt got a free header from a corner to make it 9-0.

The referee eventually brought the slaughter to an end as Celtic ran riot on Tayside. Hoops fans will be revelling in a result achieved without striker Giorgos Giakoumakis and new signing Sead Haksabanovic, whilst Dundee United fans will be wondering where to turn as their side sit bottom of the Scottish Premiership.