Harkins: Dundee United would be a big miss 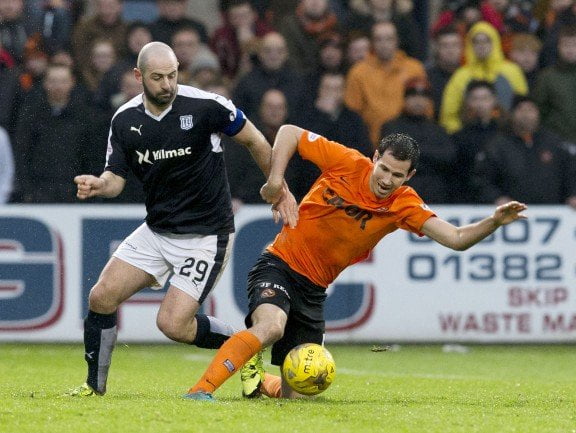 Dundee midfielder Gary Harkins admits city rivals Dundee United would be a big loss to the Scottish Premiership but doesn’t believe they are out of it yet.

United are rooted to the bottom of the table, 14 points adrift of Kilmarnock, Hamilton Accies and Partick Thistle who lie directly above them in the league.

United face Kilmarnock at Tannadice this weekend and a defeat would surely all but end their chances of staying up but Dundee’s Harkins says they’re not down yet.

“They’ll be a big miss if they do go down. I don’t think they are down yet,” he told Peter and Roughie’s Football Show.

“In five or six games they’ve been leading but then not winning so if they could turn those games into wins then they could make a right fight of it.

“The league is that tight now that if they get a couple of wins they could be right back in it.”

Harkins played an instrumental role in Dundee’s 4-2 victory over Partick Thistle at the weekend.

The 31-year-old was given the armband by his manager Paul Hartley after the departure of Kevin Thomson and promptly led by example with two assists and two goals – the second of which was a piece of brilliance.

Hartley’s side eased themselves into the top six with that win and Harkins is hopeful they can build on last season’s top-six finish.

“Our aim is to beat last year if we can finish sixth or above then that’s a good season.