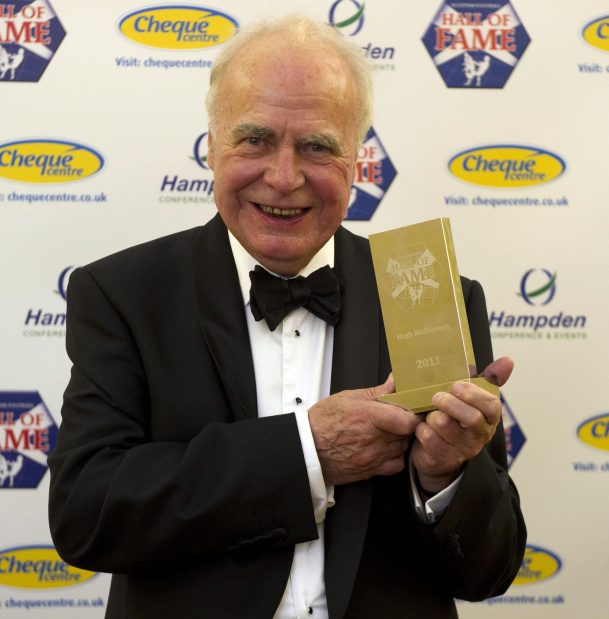 He was, for me, Dalglish, Stein, Red Rum and Muhammad Ali all rolled into one. A man for all heroes.

When Hugh MacDonald delivered the sad news of Hugh McIlvanney’s death on Thursday evening, while sitting in an Italian restaurant alongside our other compatriot Hugh Keevins, a heavy sense of loss of one of the true greats enveloped our wee night out.

The fact that Keevins and myself were partaking in a red wine race may well have met with his approval, but we were lightweights by comparison to some of the long lunches Hugh would have embarked on from the sixties to the noughties.

I cannot in any way lay claim to knowing Hugh McIlvanney really well, that is for more informed members of his fraternity, far more gifted in delivering an insight into the real man behind the myth. The aforementioned MacDonald of the Daily Mail springs to mind more than most.

I consider myself one of the lucky ones that over time was fortunate enough to be in the presence of a man I admired.

He was one of our own, and like many Scots, we like to brag about them with a sense of pride that they are just like us. Stein, Shankly, Busby, Ferguson, Buchanan, Watt, Dalglish, Connery, Connolly and McIlvanney. There are many more we could all add.

In Lanarkshire, we didn’t buy The Observer, that was for people who owned their own home, not families from the council houses.

I loved his column, his wit, his opinion and his ability to paint a picture of an event in a way that on many an occasion challenged the mainstream view. He used words that forced me time and again to get the dictionary out to check their meaning.

He made you look deeper into the soul of the manager, the player, the boxer, the trainer at that moment in time where triumph or tragedy occurs.

When the Scottish football hall of fame put together a committee to determine inductees, there was only ever going to be one chairman. The fact that I was selected as one of the disciples was an honour.

When Hugh walked into the room at Hampden, for me, it was the same sense of awe and admiration that greets only the best of the best. In sports journalism, he was a colossus.

When he lit his cigar to bring the committee to order, I had to suppress the laughter as his caricature was replicated in real life. Then followed that unmistakeable voice with a pace and tone befitting of a Shakespearian actor delivering the final lines of Macbeth.

In our game, telling the story to the best of your ability in print or across the airwaves about a sporting moment pays the bills. We are perpetually chasing the big interview with a special player.

I make no bones about telling you that on the many occasions when Hugh was able to grace us with his presence at the hall of fame meetings, I was hatching my plan to see if the ultimate storyteller would allow me an hour of his time to scratch the surface of his golden memories of football and boxing.

Having supplied MacDonald of the Mail with more than a few favours, I decided it was time to put the squeeze on him to corner his good friend about my interview request. Hugh, thankfully came up trumps and my Mcillvanney interview was on.

At the Hilton hotel in Glasgow, one sunny afternoon, I rolled the cameras and clicked the tape machine for safety for sixty minutes with Hugh Mcillvanney.

They say you should never meet your heroes in case they disappoint. I wasn’t disappointed.

We rolled back the years without a note in sight, about Stein, Jimmy Johnstone, George Best, Bob Paisley, Brian Clough, Pele and Maradona.

The final question about my boxing hero Muhammad Ali was the equivalent of two wee boys on the beach at Ayr licking an ice cream on the best day ever.

Hugh smiled, because he knew the question was coming, but the answer about the great man made me feel as if I was in the room alongside Hugh and Ken Jones of the Mirror interviewing Ali in Kinshasa after he had just beaten George Foreman.

Just short of an hour, I stretched my hand out and said my thanks to the great man, trying to keep my composure about how much I enjoyed our chat. The one moment I let my guard down to act like a fan was for the obligatory photograph, which takes pride of place in our studios at PLZ.

In Scotland, there are statues to many a celebrated son. In my mind, there is no one more deserving to be cast in bronze than Hugh Mcillvanney, if only to remind future generations that his story is a lesson on how to tell the story.