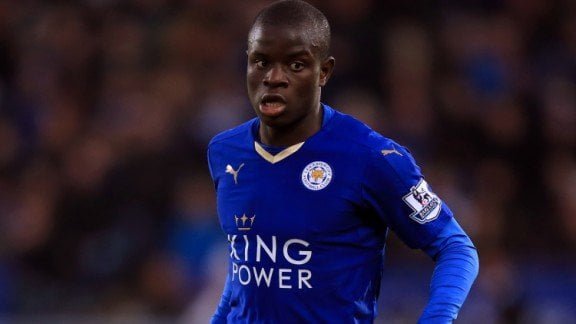 In-demand Leicester midfielder N’Golo Kante insists he is happy at the Premier League champions – “for now”.

Kante joined from Caen for £5.6million and was nominated for the Professional Footballers’ Association Player of the Year award, which went to Leicester team-mate Riyad Mahrez.

Arsenal, Paris St Germain and Juventus have all been linked with the Paris-born player, who only made his France debut in March.

But Kante, part of Didier Deschamps’ France squad for a Euro 2016 campaign which begins with group games against Romania, Albania and Switzerland, remains focused on his international duties.

“For now, I am happy at Leicester,” he told L’Equipe. “I do not pay too much attention to everything that is said. For now, I am in Leicester and I focus on the Euros.

“I think that my season at Leicester surprised everybody. People liked to see a new Premier League champion. We had a magnificent season.

“And then, my debut with France went well. Maybe my journey also helps compared to other people who come from amateur football.

“I try to stay the same. I am not aware that my personality is different.”

Meanwhile, the Foxes are close to signing Hannover goalkeeper Ron-Robert Zieler as they seek back-up for Kasper Schmeichel with Mark Schwarzer and Ben Hamer expected to leave.