Kun is the best 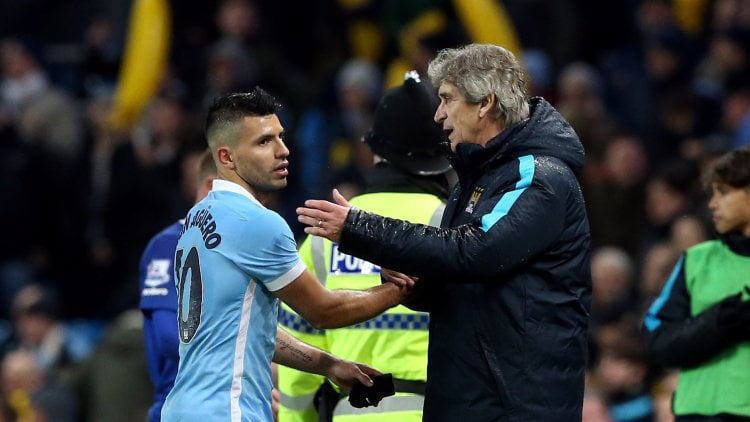 Manuel Pellegrini hailed Sergio Aguero as one of the best players in the Barclays Premier League after the Manchester City striker scored a hat-trick in a 3-0 win over 10-man Chelsea at Stamford Bridge.

With a top-four place at stake and a first Champions League semi-final against Real Madrid on the horizon, City had more to play for than reigning champions Chelsea, who remained 10th after Saturday’s loss.

Aguero struck twice from counter-attacks, with the impressive Kevin De Bruyne shining on his return to west London, before tucking home a penalty after Thibaut Courtois was dismissed for fouling Fernandinho inside the box.

The Blues created very little and have now won just one of their last seven games in all competitions, with Guus Hiddink losing two league games in a row for the first time in 12 years.

But Aguero’s hat-trick took the Argentina international to 21 league goals for the campaign and helped move City to third in the table.

Despite another prolific season, Aguero has not been included on the shortlist for the Professional Footballers’ Association Player of the Year, and Pellegrini was at a loss to explain why.

“It is very strange that Sergio has played so many years here and has never been the best player in the Premier League,” he said.

“I think he is really great. I think in the Premier League we have very good players, but without doubt Kun is one of the best, if not the best.

“It was a great victory and a very good performance, very important not just to win but to play the way we did.”

De Bruyne was rampant having missed almost two months with a knee injury before returning at the start of April.

Pellegrini has also welcomed back Samir Nasri after a five-month lay-off, and he too impressed – with the City boss pleased to have all of his big-hitters fit and competing for places.

“We make some very important counter-attacks but I think we had a lot of possession, we defended very well and created a lot of chances,” he said.

“I always say when you have all of your best players 100 per cent and playing all together, with Kevin, with Kun, with Yaya (Toure), with Nasri, with Fernandinho, of course it is better.

“One of the merits of this squad is to be involved in all competitions. We won the Capital One Cup, unfortunately we lost here 5-1 and wanted revenge for the FA Cup with our young team.

“We are in the Champions League and for different reasons we are not fighting for the Premier League – but when you have all of those players of course it is more easy.”

Interim Chelsea boss Hiddink admitted his side deserved to be beaten as they missed out on a chance to leapfrog Stoke into ninth place.

“It was a bad defeat because first of all we were playing a very strong team,” the Dutchman said.

“Manchester City are proven to be a very strong team, not just this season but in the last weeks. It is not for nothing that they are in the last four in Europe.

“It is good to see that team unless you have to play them. We made some mistakes and had some control in the first half.

“We were warned they could have a beautiful counter-attack to harm us and it happened from our corner and made a beautiful goal for them.

“The second was similar and they had a counter as well. It means we were in control without having the ultimate bite to kill it off.

“When you are 2-0 down it is difficult. On top of that we had the red card and then it is totally different. Of course we are disappointed but this is a team which is very experienced.”

With Italy coach Antonio Conte set to take over in the summer, Hiddink has taken the chance to give some youngsters a taste of first-team action with the likes of Ruben Loftus-Cheek, Bertrand Traore, Kenedy and Baba Rahman all involved.

“They must show themselves,” Hiddink said of the Chelsea squad in the closing weeks of the campaign.

“That is why we have put some young players in. We might not win any silverware, but give them a chance against strong teams to get them experience and I must say to pick out Loftus-Cheek, he is starting his third game and is gathering the experience to be grown up.”