By Peter MartinFebruary 7, 2016No Comments 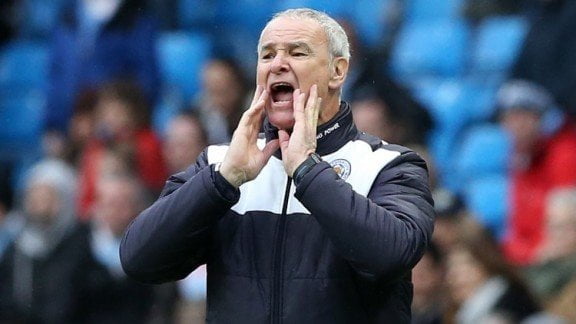 Leicester boss Claudio Ranieri refused to accept his team were now title favourites after their sensational 3-1 win at Manchester City.

The surprise Barclays Premier League leaders opened up a six-point lead over Manuel Pellegrini’s men – the side many expect to take the crown – with a near-perfect display at the Etihad Stadium.

One leading bookmaker immediately made Leicester – 5,000/1 outsiders at the start of the season – the new 7/4 favourites for the title with City drifting to 9/4.

But Ranieri, aware he was the one-time favourite in the ‘sack race’, said: “I don’t believe the bookmakers. At the beginning of the season the bookmakers said, ‘sack Ranieri’. I hope one time they are right!”

Leicester were superb from the outset, taking a third-minute lead with the first of Robert Huth’s two goals and constantly troubling their illustrious hosts on the counter-attack.

With City failing to break down their stubborn defence, Riyad Mahrez doubled the lead with a fine strike early in the second half and Huth sent the visiting fans into dreamland on the hour.

Ranieri said: “It was a good performance. Difficult, because when you’re playing against a team like City, players with fantastic quality, it’s not easy but we concentrated very much.

“We wanted to try to win, without pressure, just enjoy the match, and try to do our best. I think the first goal was very good for our confidence and then we closed all the space.”

Leicester may now be in pole position but they face another tough test against Arsenal next week and Ranieri is refusing to think about winning the title.

“But we’re alive and we want to fight. I hope we concentrate as well as in these last matches to continue our dream.”

Opposite number Pellegrini, whose side managed only a late consolation through Sergio Aguero, was impressed by Leicester but claimed the title race was far from over.

He said: “If they continue the way they are playing they are favourites. They are doing well and have an advantage in points. We played against a very good team and it is fair to give them merit.

“But it just depends on what they can do from now until the end of the season. Having to play 13 games more is very difficult to predict.

“It was our chance at home to recover the lead in the table. We couldn’t do it and now we are six points behind Leicester, but we have another 39 points to play for so it is important to be focused game by game and try to beat Tottenham here, as they are another team fighting for the title.

“We’ll see what happens between Arsenal and Leicester. There are too many things that can happen with 39 points more to play for – but this was a defeat we didn’t expect.”

The game was City’s first at home since it was announced Pellegrini would be replaced in the summer by Pep Guardiola. The club hoped making the news public – as it had seemed an open secret – would galvanise the team for the rest of the season but it did not immediately have that effect.

But Pellegrini said: “I think I talked too much about last week. I don’t think it is fair to try to have excuses for other things.”

Pellegrini added that David Silva left the field in the 77th minute after aggravating an ankle injury and he could now be doubtful for next week’s key clash against Tottenham.

He said: “David was playing the last game with pain in his ankle, today was worse because he had a twist in his ankle. We will see, but I think it will be difficult for him to recover soon.”

Asked if he could recover to face Spurs, Pellegrini said: “I don’t think so, but we must wait for the week.”