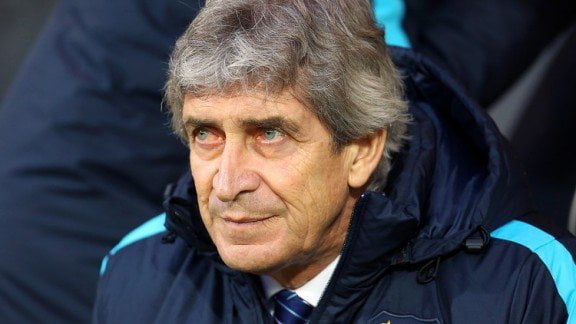 City are very much in the title race, currently lying third in the table and only trailing second-placed Leicester and leaders Arsenal by a point.

But their results have been inconsistent, with those registered on the road particularly troubling for Pellegrini, the Blues winning only one of their past seven away league games.

That victory came in their last – a 2-1 come-from-behind triumph at Watford – and City go into Saturday’s contest on the back of a comprehensive 4-0 home hammering of Crystal Palace last weekend.

Pellegrini said ahead of the tip to sixth-placed West Ham, who beat City 2-1 at the Etihad Stadium in September: “We must try to arrive as soon as we can at the top of the table.

“It is not easy but we must try to demonstrate why we are fighting for the title.

“It is a difficult game because we are playing against a very good team that beat us at home at the beginning of the season.

“As always, I hope we are going to go for three points, and for that we need the personality to go there and play well.

“I think our mentality always is to be an attacking team.

“Maybe a lot of time you cannot score, but if you score four like we did last time, of course I’m very happy – it is the way we want to play and is the best way for this team to win titles I think.

“I hope that will continue, with us scoring goals.

“In some games, especially playing away, we haven’t been able to score. But I hope tomorrow we are going to return as we did in the last game we played away, against Watford.”

Meanwhile, Pellegrini has reacted to the latest comments from City midfielder Yaya Toure’s agent Dimitri Seluk by stressing the importance of focusing on the present rather than the future.

Seluk was quoted this week as saying of Toure: “He will not move in January. However, in the summer things can change. We are ready to listen to any offers that are on the table.”

Questioned about that on Friday, Pellegrini said: “For Yaya and every player the most important thing is to think in the present and about the next game.

“At the end of the season you never know what will happen with anyone, so it is very important not to think what your future is.

“It important to demonstrate why we are here at Manchester City and the most important thing is to try to win the title this season. After that, the future can be in different ways.”