By Peter MartinFebruary 5, 2016No Comments 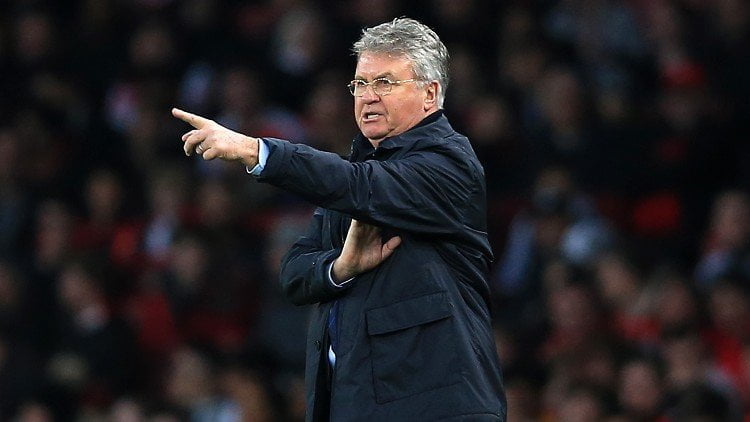 Hiddink was asked about United’s troubles in a campaign which has seen Van Gaal’s position come under sharp focus amid fan frustration over tactics and results, with Jose Mourinho apparently waiting in the wings to succeed him.

Van Gaal has bristled at suggestions he could lose his job, with United fifth, 10 points behind leaders Leicester.

And a win at Stamford Bridge on Sunday could reignite the Red Devils’ hopes of succeeding Chelsea as Premier League champions.

“He has to perform, this is normal, as we have to perform here as well,” Hiddink said.

“There is pressure. There was and still is big ambition. They have to cope with that.

Hiddink replaced Mourinho at Chelsea in December and declined the opportunity to fully appraise United’s season, suggesting the Blues had enough concerns of their own.

The London side remain in the bottom half of the table entering this weekend’s fixtures.

“I am not going into the ‘problems’ from other clubs as well,” Hiddink added.

“We can talk all morning about Manchester United, but I’m wearing a different colour.

“Every club during a season has some periods where they might worry a bit.

“We had that as well. I don’t like to go in too much in other people’s kitchen.”

Hiddink has overseen two wins and five draws in his unbeaten seven-match Premier League run and, with the top four seemingly out of Chelsea’s reach, he hinted the priorities are now the FA Cup and Champions League, where Manchester City and Paris St Germain, respectively, are the opposition.

“To get fourth position you need to win, win, win. That’s very, very difficult,” he added.

“The other two legs are FA Cup and Champions League. That’s where we’re aiming.”

Chelsea’s troubles and likely lack of European football – unless they win the Champions League, like in 2012 – could lead to a high player turnover this summer.

Ramires has already left for the Chinese Super League and it was reported that Oscar was the subject of a £57million bid from Jiangsu Suning.

“Ramires, we can say he had a great offer. Oscar is just for me, speculation, and we don’t go into that,” Hiddink added.

“We don’t know anything about this.”