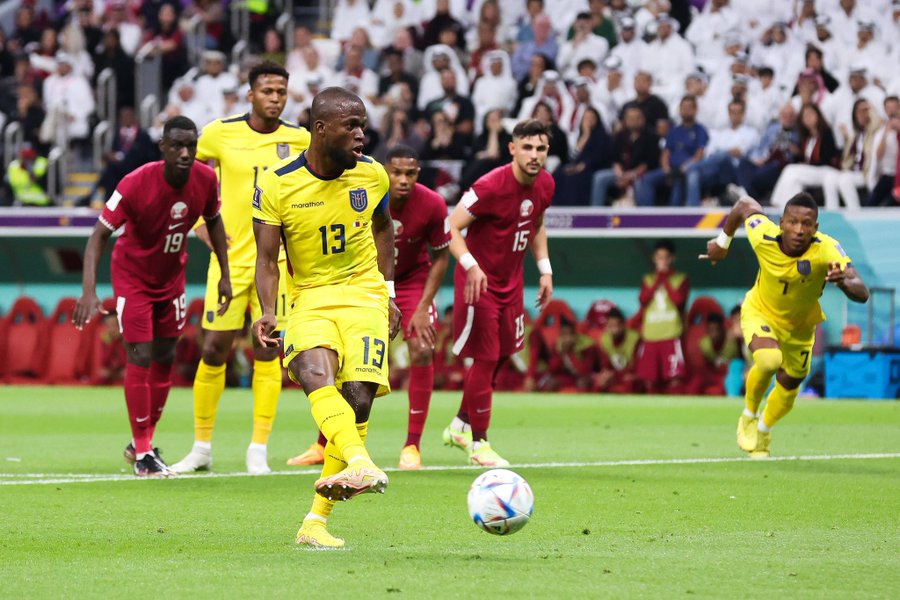 By Blair MalloyNovember 20, 2022No Comments

Ecuador cruised to a 2-0 victory, as Qatar became the first ever World Cup hosts to lose their opening game.

Enner Valencia scored a first half double to seal the victory, as the Qatari’s failed to impose themselves with the eyes of the globe watching.

‘La Tri’ stunned the 2.6 million in habitants of Qatar when captain Enner Valencia headed in with only two minutes on the clock.

However, in a world cup shrouded with controversy off the park, it took only six minutes for matters on the park to raise eyebrows when VAR intervened and ruled out the opener.

The South American qualifiers denied by what appeared to be the narrowest of offside calls.

Ecuador were imposing themselves on the game in the opening exchanges and eventually made their dominance pay when the lively Valencia won a penalty on 12 minutes.

Goalkeeper Saad Al-Sheeb took down the veteran forward, who himself stepped up and nonchalantly rolled the ball into the corner to, eventually, open the scoring in Qatar.

The host nation looked frozen on the big stage and couldn’t find any sort of rhythm.

They were soon punished by the Ecuadorians who doubled their lead on the half hour mark. Imperious front man Valencia latched on an Angelo Preciado cross and directed a stunning header into the bottom corner.

Qatar striker Almoez Ali had a glorious opportunity to half the deficit with the last act of the first half. Captain Hassan Al Haydos delivered an inch perfect ball, but Almoez couldn’t make a connection despite finding himself unmarked 5 yards from goal.

📸 Photos from the #FIFAWorldCup game between our 🇶🇦 national team and Ecuador 🇪🇨 #AlAnnabi #Qatar2022pic.twitter.com/Vvvhz9GHGD

Worryingly for Ecuador, goal hero Enner Valencia limped off the park with 15 minutes left to play. The forward departed with the accolade of most ever World Cup goals for his country following his first half double.

Substitute Mohammed Muntari almost pulled one back in spectacular fashion 5 minutes before the end, only for his dipping volley to sail over the bar.

Ecuador held out though for the perfect start to their campaign, whilst the hosts now face an uphill battle to secure qualification to the knockout stages.