Vardy reveals what Ranieri does all night

By Peter MartinFebruary 25, 2016No Comments 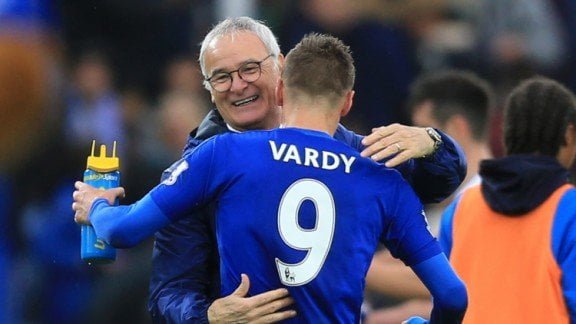 The England striker believes Ranieri has worked wonders taking the Foxes to the top of the Premier League.

Leicester host Norwich on Saturday with a two-point lead after a heartbreaking late 2-1 defeat to Arsenal in their last game.

Ranieri replaced Nigel Pearson in the summer and Vardy – the league’s 19-goal top scorer – said the former Chelsea boss is the best he has worked with and rarely rests.

He said: “It’s a difficult one, obviously each manager I’ve played under have all got different attributes. Every one has been brilliant to me but you’d probably say yeah because of what he’s (Ranieri) done in coming in and the little tweaks he made to help us on the pitch.

“I think he examines every single aspect of every opposition we’re playing. He comes into our team meetings where he’s been up all night watching 50-60 clips of just one of the opposition’s players and he will tell you exactly what he’s done in 49 of them and what he did in the other 11.

“It’s mental how much detail he goes into but it’s a help to us and hopefully gives us an advantage.”

Ranieri gave the players last week off before they returned on Monday to prepare for the visit of the Canaries. They were given a programme to follow and had heart rate monitors to track their progress, and Ranieri has been pleased with the results.

He said: ” I gave the players some programmes and they respected it and worked well. We had their GPS and when they came back the results were good. I trust them because they are very professional players. I gambled with them – we did not achieve nine points because we lost to Arsenal but they played well.”