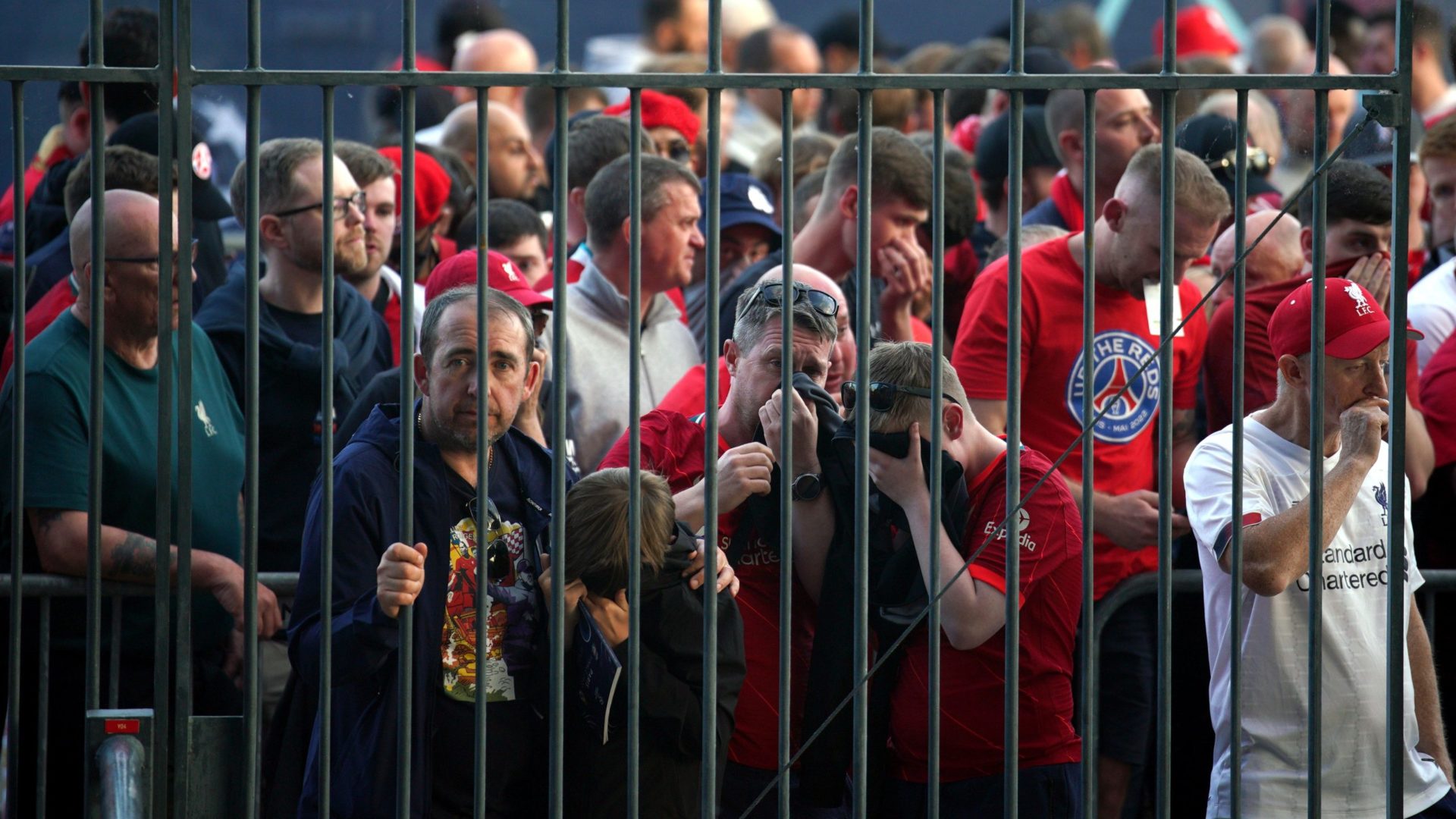 UEFA have some serious questions to answer over the next few days about the calamity surrounding all three of their prestigious European finals.

The latest shambles involved Liverpool fans trying to get in to the Champions League final at the Stade de France on Saturday evening.

Before I address the genuine concerns and fears suffered by Liverpool supporters, the over-riding question is what is happening at Uefa headquarters at the minute that has prompted a complete lack of organisation and understanding of what is required to make a category ‘A’ match run smoothly for supporters attending the game?

I’ve been left bewildered and bemused by stories of fans heading to gates unopened, supporters, many young fans among them, worried about crushing. Police using heavy handed tactics with pepper spray, teargas and being aggressive towards members of the media who may have filmed footage of the treatment of Liverpool fans.

This is a support that has been through so much pain in its history attending football matches and it will come as no surprise to many that their trust in any police force or security staff is not at a high level.

That said, there are so called fans up and down the country who knowingly attend football matches without a ticket and will attempt to get into a football ground by hook or by crook. However, Uefa is fully aware of that element and have had measures in place to counter this possibility, so that spin doesn’t cut it when addressing the issues suffered last night in Paris.

This was not just a problem for Liverpool fans; many journalists, pundits and neutrals attending this game have all commented on social media about the complete lack of information and organisation heading to gates to enter the stadium.

If you rewind to the Europa League Final on May 18th, the tactics of Saturday in Paris are all too familiar to Rangers and Eintracht Frankfurt fans attending their match in Seville.

Once again, brutality from Police, insufficient facilities to cope with both sets of supporters, and worst of all, a complete lack of supplies to aid fans sweltering in hot and humid conditions both inside and outside of the stadium.

An apology is simply not good enough at a time when Uefa faces its biggest threat from scurrilous and greedy club owners still plotting a breakaway Super League in the background.

A change of attitude towards supporters, from Uefa and most certainly from authorities on the ground at European matches is the first step that needs to be addressed.

Police and stewards need to take a long hard look at their strategy and their treatment of the paying customers. Are football fans regarded as a group of animals? I don’t hear about too many Rugby fans, tennis goers or indeed people attending music festivals sharing stories of being battered with a truncheon, their phone batteries confiscated and then to cap it all off heading to your turnstile to find it’s closed with no notification of where and what to do next.

Football is the most popular sport in the world and these jewels in the Uefa crown are more popular than ever. They must surely be aware of supply and demand for these matches and what needs to be in place to make sure fans are treated with decency, and are fully aware of the procedures in place to make their match day experience a fun and safe one.

That certainly hasn’t happened in both the Champions League and Europa League finals. My main gripe with the Conference League final has more to do with the decision to host this match in a stadium that could only hold just under 20,000 fans in Tirana, Albania.

I’m all for European football’s governing body spreading the message of the beautiful game far and wide and making it accessible to the lesser countries who don’t hold power in in Switzerland, but surely if you have five stars awarded by Uefa, it must be a venue that can offer real football fans the chance to travel in great numbers to support their team and say I was there when they won the cup.

Prepare yourself for the PR spin that is about to unfold from Uefa about the difficulties and unusual circumstances they faced hosting the final at such short notice in Paris.

Quite frankly, that won’t wash with anyone over here in the UK. We are now immune to spin from people who couldn’t give two hoots about the common man or woman on the streets.

There needs to be a real change in attitude to football supporters at home and abroad. There must be better communication and dialogue on the way forward that allows families to feel safe, secure and looking forward to attending an event without the fear of being battered, sprayed or denied entry to the match having parted with thousands of pounds of their hard-earned cash.