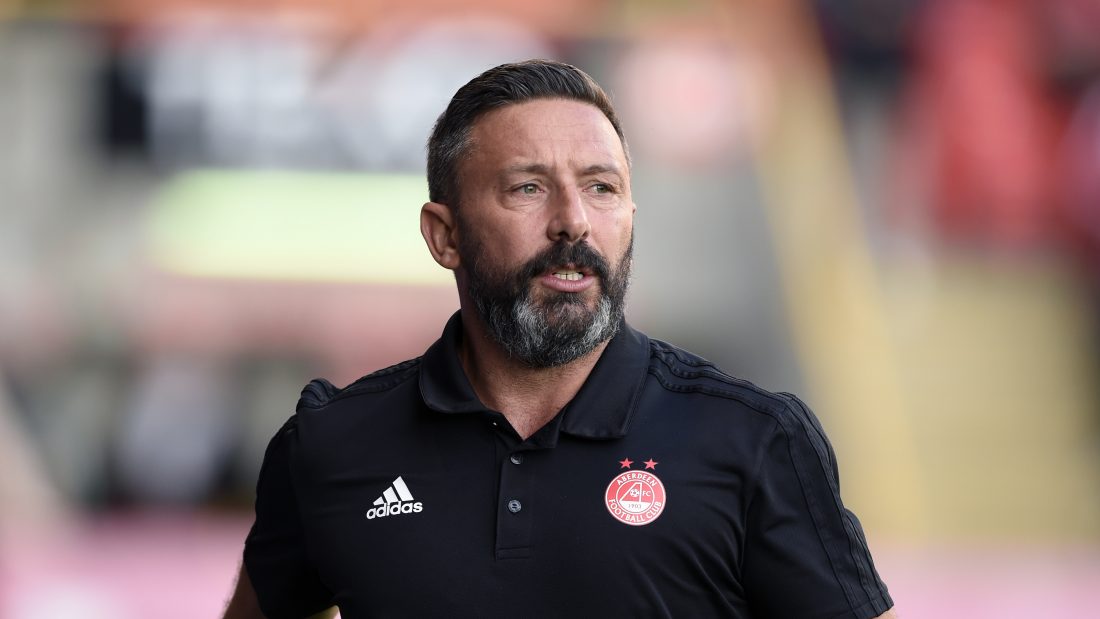 Aberdeen fans who are calling for Derek McInnes’s head should sit down, belt up and back their manager. He is the man for the job and should be given the chance to improve things this season, despite moans from fickle Dons supporters over the past few weeks.

McInnes will simply point to his record to show he has the managerial prowess to make this a positive campaign. When he took over the reins in 2013, the team had just finished 8th under Craig Brown and hadn’t seen any silverware since 1996.

Within a year they had the League Cup in the bag and since have finished, 3rd, 2nd four times in a row and 4th last time out, resulting in Thursday summer nights at Pittodrie every single season.

The Dons were at the national stadium three times last campaign and beat arch-rivals Rangers a hattrick of times in their home city. These are the kind of things that Hibs and Hearts fans would tear your hand off for. The former Bristol City manager has run the transfer business on a shoe-string, even though ins and outs have not been up to standard.

Just look at what Rangers and Celtic are paying out every summer and compare. Aberdeen also don’t even have an official training ground. The facilities are so far off it is ridiculous, hence why the ‘Kingsford’ project must be completed as soon as possible.

McInnes has kept the team more than competitive despite all of this. He has raised expectations and has credit in the bank. He can afford an ‘off-year’. But will this even be one of those? As stated, the team are fourth and thanks to other teams regressing, it looks very much like they could end up in the ‘Top 4’ yet again.

Plus, McInnes has consistently lamented the injuries to his side, which have left him often with youthful and inexperienced players. With all of his players back, McInnes will back himself to start picking up points again.

There are causes for concern though. Boo’s ringing around Pittodrie, compiled with the barrage of ‘McInnes Out’ chat on social media, make the unrest amongst the support clear and it is easy to see why. The last few weeks have been tough, winning only one of their last five matches.

The sole victory at Livingston was even met with jeers because the display was so poor and quite frankly Livi were unlucky to not get at least a point. Last Saturday’s performance against Rangers must have been one of the worse in the McInnes era.

‘McInnes-ball’ has really come under fire this season, with fans disgruntled with the style of play, critical that the team is too often direct and dependent on Sam Cosgrove and that there is no evident ‘Plan B’ when it is not working. However, it is not necessarily a recent trend. Last season, the team on a run when they won only two out of twelve home games. The signs have been there for a while.

It is not only the recent results that have irked supporters. Aberdeen have won one trophy in my lifetime and it is simply not enough for a club who believe they are the third biggest in the country. For the amount of times they have qualified for Semi Finals in recent years, they have not converted enough into actual silverware.

Many Dandies feel that when it comes to the biggest games, especially against the Old Firm, the team set up to try and not get beat, where perhaps a more gun-ho approach would not only bring the whole support back on side but also reap more rewards on the park. The same can be said for Europe, where this year they went out on a whimper against Rijeka, a team they had eased past four years earlier.

Despite continually finishing in Europa League places, McInnes has never got past the third round of qualifying. There has simply been no progress on the Europa League front and even though it is harsh, so much of the season is based on the opening continental qualifiers, like it is for all big teams in Scotland.

Transfers in and out of Pittodrie must also be questioned. How many additions in the last four years would be classed as ‘good signings’? Lewis Ferguson, Joe Lewis and Sam Cosgrove all get a thumbs up. Mikey Devlin and Ryan Hedges are both recent internationals.

Other than that, what is there? Big fees were paid for Stevie May, Chris Forrester and Kari Arnason and they have all already left for nothing, having failed to make an impact. Other questionable pieces of recruitment include, Anthony O’Connor, Miles Storey, Greg Tansey, Nicky Maynard, Stephen Gleeson, Tommie Hoban, Ash Taylor and Craig Bryson, too many of them falling by the wayside or injury prone.

Too often these signings have stopped the progression of youth into the side, youth that is often good enough to succeed. And it is not just the incomings that leave fans feeling deflated. The best players have consistently been allowed to leave, often for nothing.

Club captains Graeme Shinnie and Ryan Jack both went through the exit door for no fee, Gary Mackay-Steven moved across the pond for zero, Kenny McLean now plays in the Premier League but cost only £200k and Jonny Hayes joined the best team in the country for just over £1million.

There are evidently plenty of reasons that Aberdeen fans are disgruntled but they must have patience and remember the state of the team in the 2000’s.

McInnes deserves his chance to make things better at Aberdeen with the consistency he has brought and the expectations he has raised. He has the know-how to deliver the results and the Aberdeen faithful must back him to do so.