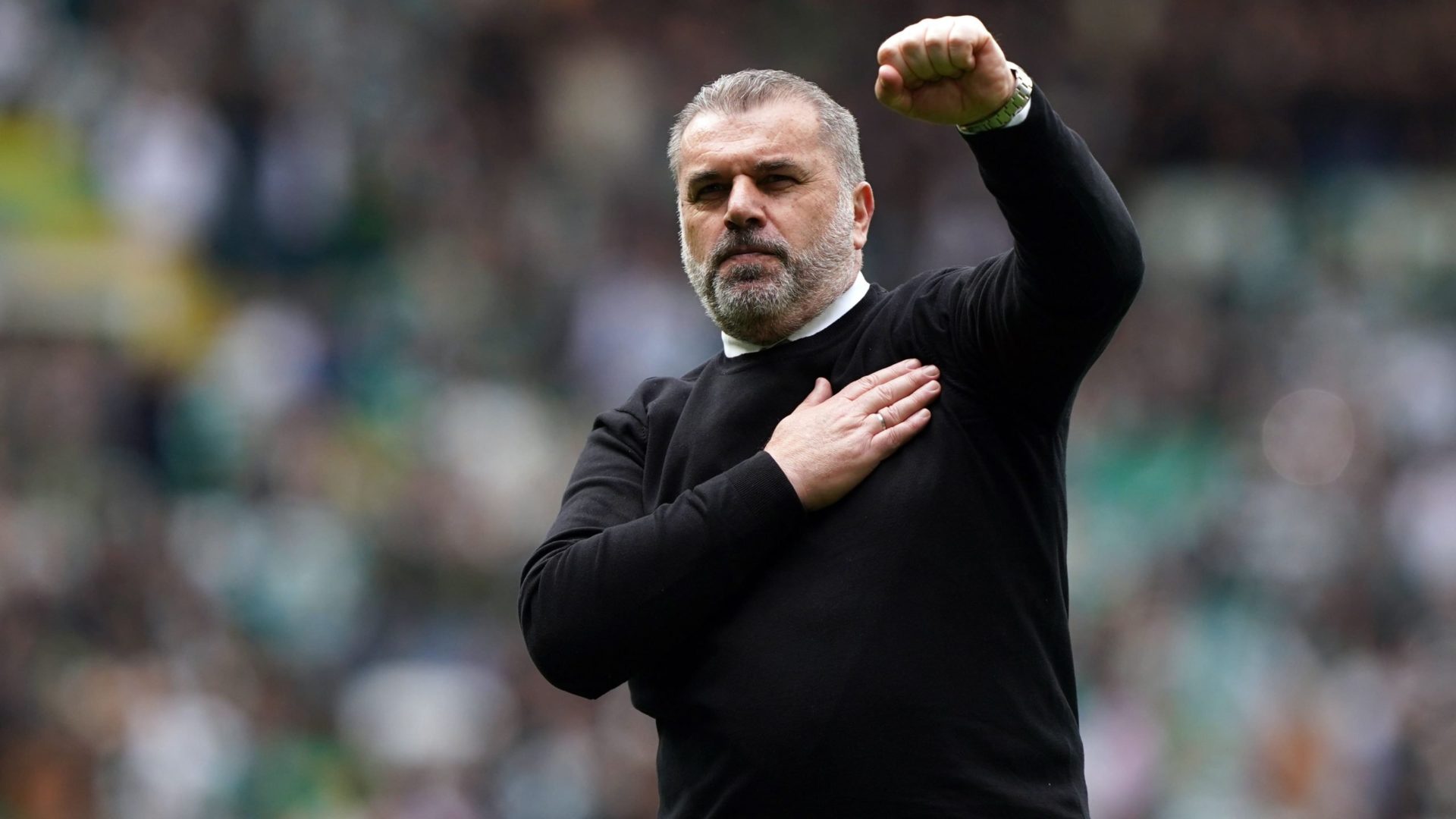 Celtic manager Ange Postecoglou hailed his side for the manner of their final surge towards the finishing line in the title race after a 4-1 win over Hearts effectively put them out of Rangers’ sight.

Postecoglou’s side now have a nine-point lead and a 22-goal advantage over their city rivals with Rangers having three games left.

Postecoglou said: “I said to the boys before the game that there are many ways you can finish something off.

“You can collapse through the finishing tape or you can go through it at top speed, and that’s what we want to do. It’s what we’ve been doing all year.

“We’ll go hard on Wednesday and get back here and go hard again in the last game.”

Nobody within the Celtic camp was declaring title victory but there was a celebratory feel to the post-match lap of honour.

“There is nothing wrong with enjoying the journey,” Postecoglou said. “It’s not always just about the destination.

“I thought it was a top performance from the boys and for us that’s the greatest reward you can get, to see the joy that it brings other people.

“Whether that’s your own family and the people who love you, or the supporters who love this football club.”

The engraver can get to work on the cinch Premiership trophy on Sunday if Rangers drop points at home to Dundee United and Celtic could officially secure the title themselves at Tannadice on Wednesday.

“I’ll win it any old way mate, it doesn’t really bother me,” Postecoglou said. “For us, what’s important is that I think we’ve earned it this year, and that we continue to earn it.

“We’re not collapsing over the line, we’re strong, we’re committed to something. Our performances and the challenges we’re overcoming are reflecting that.”

Postecoglou will not be glued to the action at Ibrox on his day off.

“As I’ve said before, my boys take charge,” he said. “There’s a new flick out called ‘The Bad Guys’, so that’s on the agenda, so we’ll see how it goes.”

Rangers manager Giovanni van Bronckhorst had conceded the title was beyond his side the previous weekend but Celtic treated their supporters to the party atmosphere they craved following a slow start.

Ellis Simms fired Hearts ahead inside three minutes and the tension was audible inside Celtic Park but goals from Daizen Maeda and Kyogo Furuhashi turned the game on its head late in the first half.

Matt O’Riley’s goal midway through the second period transformed the atmosphere into one of celebration and Giorgos Giakoumakis netted in the final minute as Celtic made it 30 league games unbeaten.

“I’m very proud of the group,” Postecoglou said. “We conceded early which hasn’t happened too much in this run. You think a little bit about how the group will respond to that.

“They were outstanding again and didn’t miss a beat. They stayed on course in terms of playing our football and we scored four good goals.

“You could sense there was a nervousness, even around the stadium. But it’s always about how people deal with that. I never had any doubts, it didn’t worry me, but I’m sure people were looking to see how we’d respond.

“But this group finds a way to respond, while not veering away from the basic values and fundamentals we have as a football team.”

Hearts manager Robbie Neilson was frustrated over the way his side conceded the equaliser after claiming Toby Sibbick was fouled by Callum McGregor before Celtic broke.

The second goal was also disputed but footage showed the ball was just over the line before Craig Gordon clawed away Furuhashi’s header.

On the equaliser, Neilson said: “It is a free-kick to be honest. I have seen it again and am pretty sure you will agree.

“These key decisions when you come here, you have got to get them. That was the disappointment with the ref. I thought it was a pretty simple one to get and he doesn’t get it right.

“The second one for the goal is the right decision – borderline but right.”

Neilson waited for referee Don Robertson at half-time but did not push his complaints.

“To be honest, it is not worth it,” he said. “Don was the same at Easter Road so I will just keep my mouth shut. We have a big game coming up in a couple of weeks.”