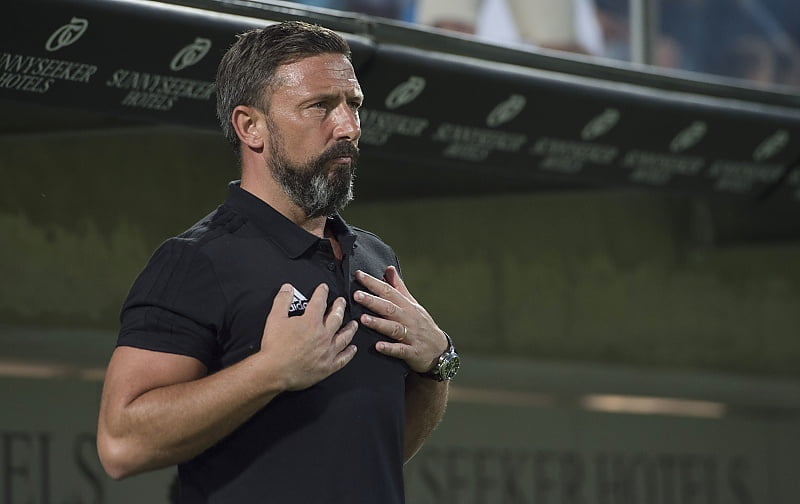 PETER MARTIN: Derek McInnes is the man for Rangers

No great surprise. I predicted he would be out by October months ago because he was out of his depth at a club that demands more than he was ever able to deliver.

The board gave him a fair amount of money and, for me, he squandered it on mediocre players that remain not fit to wear the jersey.

The Carlos Pena situation was ridiculous from day one. A professional footballer out of shape and more importantly out of touch on the park.

The manager’s rants became farcical, the best squad in Scotland to dogs barking at caravans and last week’s “point final” on the Kenny Miller situation summed up his reign.

He lost to the fourth best team in Luxembourg, not acceptable! He watched his team torn apart by Celtic in the Scottish Cup semi-final and hammered at Ibrox, unforgivable! And the last straw, bullied by Motherwell and dumped out of the League cup at Hampden, a sackable offence at the end of seven months of empty promises.

It is now not just about recruiting a new manager, it is about off-loading the dross and rebuilding a team capable of over-taking Aberdeen. Celtic are still too far off in the distance.

The next manager has to understand Rangers, build a new team, bring back a bit of dignity to the club and stop any rants from the board or PR machine on sporting integrity. It’s a big ask and requires a strong and big personality.

My choice would be Derek McInnes.

The Aberdeen boss and former Rangers player has all the credentials to fill the role and more.

He has built a strong Aberdeen side, but he has reached the ceiling on what he can achieve at Pittodrie. Sorry, Dons fans.

The club cannot take him to the next level financially or structurally. They are embroiled in a battle for a stadium and training facilities that has annoyed the manager no end.

Wednesday night’s 3-0 loss to Celtic will have accelerated the craving in Derek’s mind to get out and take on a new challenge. The fact that Rangers might have to pay a little bit more in compensation might soften the blow for Aberdeen chairman, Stewart Milne.

If the Rangers board are smart they should move immediately for McInnes, get him in without too much fuss and let him make his moves for players with the summer in mind.

Kenny McLean would easily sign a pre-contract in January alongside Jamie Walker from Hearts and Louis Moult from Motherwell. Suddenly, you have the makings of a better-looking team with a greater threat than what’s on offer right now.

Off-load the failures and use the next batch of season ticket money to fund other signings in the summer and suddenly the nightmare reign of Pedro Caixinha becomes a distant memory.

It sounds easy, but let’s see if the board share that ambition before the fans start calling for heads from the top of the marble staircase, never mind the dug-out.

Derek’s the man, go get him!