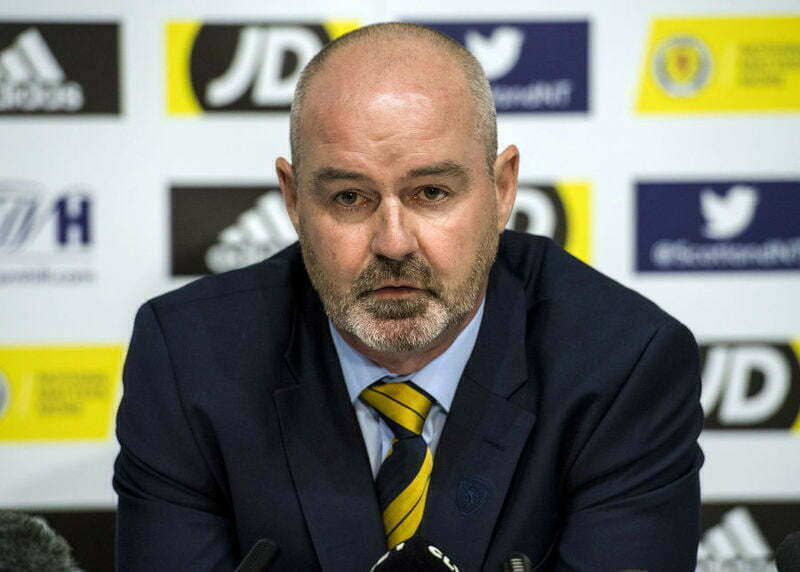 GABRIEL ANTONIAZZI: Despite what Clarke says, Russia is must win

Steve Clarke announced his second Scotland squad earlier today for the upcoming home Euro 2020 Qualifiers against Russia and Belgium and has named a squad laden with Premier League footballers.

Sitting in fourth place out of six, these two fixtures must deliver results and with the latter coming against number one ranked team in the world Belgium, next Friday’s game is pivotal.

Clarke claimed today that the Russia tie is not a must win but unfortunately I believe it is if Scotland are to have any chance of making Euro 2020 automatically.

Has the former Kilmarnock boss picked the right players and how should he line up?

Starting at the beginning, Scotland are on the cusp of changing the guard in goal. McGregor has retired and Gordon’s career is nearing an end for both club and country.

Marshall will be Clarke’s first choice and rightly so but by next summer they should be looking to younger players. Bain was chosen for McLeish’s last games and is confident with his feet but may not be Clarke’s man and is ruled out with a dislocated thumb.

Liam Kelly is another promising keeper that should be kept a close eye on down at QPR. Jon McLaughlin and Craig MacGillivray are both League One keepers so I cannot see them wearing the number one jersey anytime soon.

Leigh Griffiths missed out on selection after his long absence

Andy Robertson is Scotland’s captain and I believe he is the best left back in the world. That’s two Champions League Finals in two seasons for the Liverpool man and if he can replicate his form in red into blue then he is Steve Clarke’s only world class player. He must start in his natural position.

Kieran Tierney misses out through injury but his move to Arsenal can only be a benefit to him and his country. It remains to be seen where Clarke will fit him in but he should be on the pitch.

On the other side of defensive is less positive. Perhaps Tierney will end up playing on his unnatural side, like Danny McGrain used to do. Stephen O’Donnell is likely to be first choice this time round as he was used to great effect by Clarke at Kilmarnock.

Liam Palmer is still in the squad but I would expect him to drop out once Tierney and others return. Greg Taylor is the youngest player in the group and a fine player, the experience will do him well. Only three centre halves have been named which is surprising, considering they are the recalled Grant Hanley, the uncapped Liam Cooper and the 33 year-old Charlie Mulgrew.

Rangers midfielder Ryan Jack has come back into the fold

Hanley captained Norwich on the opening day of the English top flight but has not featured since early 2017. Cooper is a progressive choice as the skipper of an outstanding Leeds United and has a nice left foot. Mulgrew is a tidy player and a leader but is slowing down.

Calling up a fourth centre back shouldn’t have been an issue, with Craig Halkett being Hearts most impressive defender and Liam Lindsay of Stoke City continuing his development down South. Do expect McKenna and Souttar to be at the core of Clarke’s plans going forwards but the core of defence has been the downfall for too long.

Forming a solid and consistent partnership is key to smaller nations being successful (see Wales, Northern Ireland and the Republic of Ireland) and Clarke prides himself on his defensive shape, so hopefully he can produce results.

Midfield is Scotland’s strength. Well, it hasn’t actually been yet but on paper it should be and now is time to step up. In John McGinn and Scott McTominay Scotland have two box-to-box midfielders who are stick on starters for big Premier League clubs. They simply must start.

Steven Naismith returns despite injury lay off for Hearts

Alongside them, Callum McGregor is by far and away the best central midfielder in the Scottish League and makes teams tick. With those three in the middle of the park Scotland have a solid, energetic and creative core that is good enough to hold its own against almost every opposition it could face.

Ryan Christie is in stunning form and looks extremely fit and should now be considered ahead of Stuart Armstrong and Robert Snodgrass in the pecking order despite their superior experience. Experience has got us nowhere in the past 21 years, it is time to go with youthful, hungry, energetic players.

Kenny McLean and Ryan Jack are two good squad players, both playing at a high standard and worthy of their place in the group. John Fleck, Tom Cairney and Graeme Shinnie are all good players but such is the strength in depth that they deservedly miss out.

Scoring goals has been a problem for Scotland for years. Who was the last undisputed Number 9? Only 2 players this millennium have more than 12 goals. The only active player in double figures is Steven Fletcher with 10 (although his international career looks like it may be over).

Steven Naismith has 9 goals in an 11 year stint. Leigh Griffiths has 4. But I do not see that as the biggest issue, given the impressive midfield and wide players. Look at Olivier Giroud for France in Russia last summer. The Chelsea man did not even have a shot on target at the 2018 World Cup yet his team won it, partly thanks to his self-less style of play. By occupying the defenders, holding the ball up and bringing others into play the team flourished. Griezmann and Mbappe both notched 4 times, with Pogba adding 2 from the middle.

Of course Scotland are not of the same standard as France but the same principal can be used and to be fair to Clarke’s predecessor Alex McLeish, Steven Fletcher did that impeccably in Scotland’s 3-2 win over Israel last November. With the Sheffield Wednesday man now out of the frame, it could come down to Oli McBurnie, who has been recently bought with a £20m price tag, to take up his mantle.

Hearts fans believe defender Craig Halkett was worth a call up

Whether he is ready to do so at this level remains to be seen. Steven Naismith could be in line to start and is an intelligent player who can certainly offer something to the squad, if not the starting team. Johnny Russell has been one of Scotland’s better performers over the past 18 months so his inclusion is warranted but what Matt Phillips is still doing in the squad I am not quite sure.

Griffiths is the best natural finisher Clarke has but I think it is wise to give him that extra break and make sure he is fully fit and firing before a recall. James Forrest and Ryan Fraser, Scotland’s own Griezmann and Mbappe if you will, are the two match winners at the peak of their careers that must be utilised effectively.

Playing any other formation than a variation of 4-3-3 is a waste of the two of them and their counter attacking skills and I think Clarke knows this. Fraser had a hand in 21 Premier League goals last season and James Forrest was SPFL Player of the Season last campaign, as well as Scotland’s Player of 2018.

Andy Robertson will look to lead Scotland to victory

Finding the right connection in attack is the difference between being solid and hard to beat and genuinely threatening to take big scalps and *whisper it quietly* qualifying for an international tournament.

Scotland must beat Russia next Friday night if they want to qualify for Euro 2020 automatically. If they don’t, it is all but beyond them. Clarke showed his tactical nous over his 18 months at Kilmarnock and got off to a reasonably positive start to his career at Hampden Park but this is where the judgements will be made.

His team must back themselves to go toe to toe with Russia (who were a penalty away from the World Cup Semi Final) in the same way his Killie team did with the Old Firm last season.

Led by the new crop of Premier League stars, the nation will hope Clarke can find the right balance in defence and attack to earn 3 points next Friday and keep qualification alive.