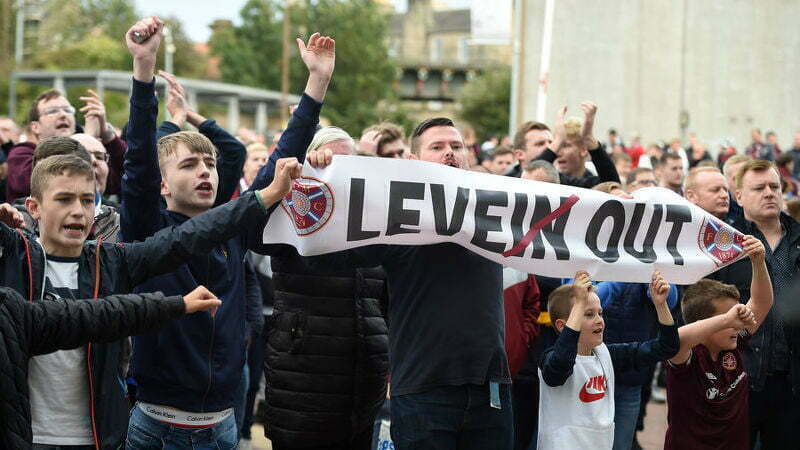 This is one of the most keenly anticipated Edinburgh derbies in recent years but for all the wrong reasons.

Both managers are under increasing pressure from their unhappy fan bases (but apparently not from their bosses) and people are predicting that Sunday’s result could prove the end for one of them.

Craig Levein of Hearts and Paul Heckingbottom of Hibernian will both be desperate to win on Sunday for more reasons than ever before. But do they deserve to get the chop? And if so, who should go first?

Let’s start with the visitors this weekend, Heart of Midlothian. The reason to start here is because the temperature at Tynecastle appears to be slightly hotter than that at Easter Road.

After Saturday’s drab 3-2 loss at home to Motherwell, there was aggressive protesting outside the entrance of the stadium, with several fans trying to force their way in (what their plan was once they were inside I have no idea).

Hearts have won just 2 points from a possible 15 this season, thus are win-less and bottom of the league. The signs have been there for a while though.

They have only won 4 league matches this calendar year and they haven’t won a league game in 12 games, stretching back 172 days to March 30th.

Their runs in the cup papered over the cracks last season as they reached Hampden three times, but in the two cup runs they only beat two Premiership teams, Motherwell and Livingston.

It is not only the results that have left the Jambo’s restless. Craig Levein has been the manager for over two years now and has failed to implement a specific style of football to his team.

What formation do Hearts play? How do they get all of their best players into the team? What is the team going to look like in 3 years time? These are all questions unanswered.

The squad itself is far too big and unbalanced, with several players on a decent wage who are not playing regularly. How do you fit big names such as Sean Clare, Christophe Berra, John Souttar, Conor Washington, Jamie Walker, Steven Naismith, Uche Ikpeazu, Glen Whelan, Peter Haring, Craig Halkett and Loic Damour into the team and keep them all happy.

Never mind Jake Mulraney, who was one of their strongest performers last season, their two loanees from the Manchester clubs, as well as continuing to bring through youngsters such as Aaron Hickey. It all seems to be a mess for the maroon side at the moment and it does not look like things will get much easier.

In the five games before the international break, they visit Hibs & St Mirren, whilst welcoming Aberdeen, Kilmarnock and Rangers to their ground. If I was a betting man I wouldn’t have Hearts on my coupon over the next few weeks.

So could the October internationals be a suitable time to part ways with Craig Levein? The problem is, he is also the Director of Football at the club and sits on the board at Tynecastle and has done for 5 years.

It has got to the stage where many fans will not accept Craig Levein moving back to the boardroom, they want him out for good. The question is, will Ann Budge bend to the will of her loyal supporters and get rid of a man who she has publicly backed many times.

So whilst things are not great with Hearts, they can take some solace in the fact things down in Leith are not much better. Hibs fans are treating their side with perhaps more apathy than the anger that their neighbours are but Paul Heckingbottom is rapidly losing the backing of his support.

Rewind to the Edinburgh derby at the start of April just two months into his tenure, things could not have been much better.

A Daryll Horgan brace had given the Hibees a win at Tynecastle for the first time in years. Paul Heckingbottom was unbeaten in his first 10 in the league and took the team to 5th from 8th.

However, he did not win a game in the split and the football style was accused of being a bit ‘turgid’. Hibs have only won one league game since that Derby, the opening day of this season and have suffered some poor results this season. It is early days but they are 9th.

The next four games are not easy reading either in Hearts, Kilmarnock, Celtic and Aberdeen. Pressure for the Yorkshireman to prove he does have the tactical nous to succeed is rising.

What winds up many Hibs fans is that they have the making of being an attacking, exciting side. Florian Kamberi, Scott Allan, Stevie Mallan, Daryll Horgan and Martin Boyle are all players blessed with either pace or high technical ability (or both).

They have exciting youngsters in Oli Shaw, Fraser Murray, Ryan Porteous and now Glenn Middleton (on loan from Rangers). There is a feeling though that they went the wrong direction in summer.

Instead of recruiting more pacey, attack minded players (why they did not go all out for Lawrence Shankland I have no idea) they went for players Paul Heckingbottom knew from down South.

Chris Doidge was signed to score the goals at £250,000, with Josh Vela and Joe Newell also coming in. None of them seem up to the standard yet, although I will be happy to eat my words if things turn around come May.

I feel Paul Heckingbottom deserves more time than Craig Levein, as he has only had 7 months and one transfer window to mould his team.

Saying that, if things do not improve by this time next month and things go wrong against their enemies on Sunday, will Leeann Dempster pull the trigger?

This weekends’ game promises much. It will be fiery, frantic and full of action as always but if one manager comes worse off than the other, it could spell the end for them, sooner rather than later.