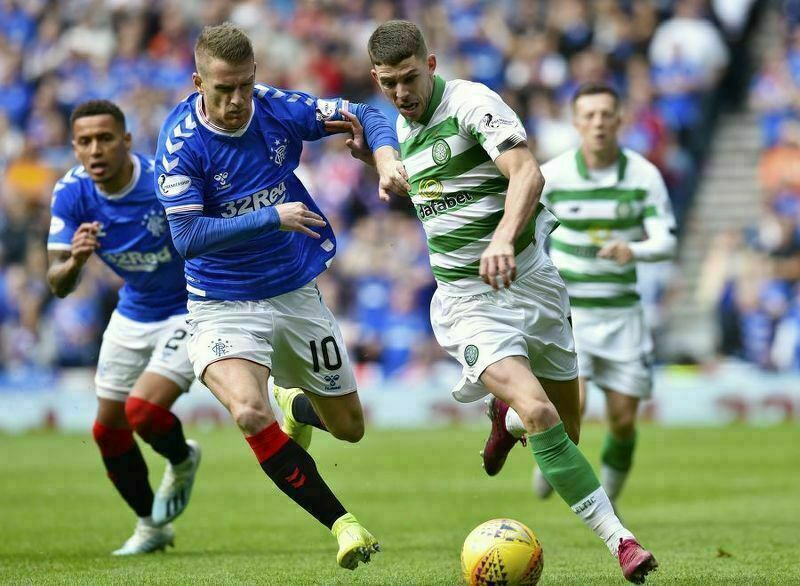 THE first Old Firm of the season was one of the most anticipated in recent memory but it did not go the way many people expected (as Neil Lennon was quick to point out after the game).

But why did Celtic win the match with relative ease? And what does the result mean going into the rest of the season?

Here are 5 things we learned from Rangers 0-2 Celtic.

1. STEVEN GERRARD GOT HIS TACTICS WRONG

Steven Gerrard changed up his formation for Old Firm derby

To anyone watching the game this was fairly obvious. So far this season Gerrard has favoured a 4-3-3/4-2-3-1 and remained unbeaten, with the midfield consisiting of Jack and Davis behind Aribo, Ojo or Jones on the left and Arfield popping inside from the right.

However, he changed it on Sunday and went with no natural wide players. I don’t think Gerrard ‘bottled it’ but more was caught up in the idea of suffocating Celtic and letting the players and the atmosphere strangle them.

Rangers set up to stop Celtic, instead of playing to their own strengths. Pre-game the talk was of Celtic’s weakness at the back but Rangers did not even get close to exposing them and by not playing a Number 10, no one successfully linked play from midfield to attack.

2. CELTIC’S DEFENCE IS BETTER THAN EXPECTED

Celtic defender Jullien put in man of the match performance

Celtic’s defence has taken some stick at the start of the season but they really proved their worth here. Given 3 of the 4 defenders starting for Celtic were making their debuts in this fixture (the experienced man in the back line was Bitton, whose natural trade is in the midfield) you could forgive people for expecting them to be given the run-around.

However, the opposite happened. Elhamed was strong and assured in the tackle and also offered a threat going forward. Jullien was comfortably Man of the Match and he proved that he is well worth the £7million paid for him, whilst Bitton showed why Lennon wanted to keep him on at the club.

Bolingoli has been subject to a high level of criticism since his arrival and at times it has been warranted but he was excellent on Sunday and did not look intimidated in the slightest.

The whole defence worked as a unit and will give Lennon extreme confidence in them going further into the season. With Forster behind them and Taylor bolstering their options, expect Celtic to keep many more clean sheets.

3. EDOUARD IS REAL DEAL BUT ARIBO IS WORK IN PROGRESS

When the ball fell to Edouard’s feet just inside the box, everyone knew what the outcome would be. The Frenchman is completely unfazed by any situation and was outstanding again, as he has been all season.

What has really impressed me is his hold up play, which was a weakness when he first joined 2 years ago. Once he gets his turn in and stands the defender up there is no one better in the league. On the current trajectory he will is on the same path as compatriot Moussa Dembele, although I expect Edouard’s price would be higher.

He is the jewel in Celtic’s attack and I thought that Joe Aribo, recently arrived from Charlton Athletic, could be the same for Rangers. I have seen flashes of brilliance so far from him this season and was hoping for big things on Sunday but it never happened. I am not writing him off at all but it he was below par.

Yes he was playing out of position but he looked timid, hardly got on the ball and rarely beat his man. He will need to show much more if he wants to reach the heights of the Scottish game and even keep his place in Gerrard’s XI.

4. CELTIC ARE STILL THE TEAM TO BEAT

Neil Lennon’s tactics were spot on for Ibrox clash

Rangers were the bookmakers favourites going into this game and Ibrox has become a fortress for them but Celtic are still the team to beat. They won the league last season by the same distance they did in 2018 but this time they amassed more points. They have won 9 trophies in a row.

There has been a notion created somehow that their grip on Scottish football is waning but Sunday proved that isn’t the case. There is still an evident gap between the Glasgow clubs and determining how big that gap does not really matter- it still exists.

For Rangers to mount a serious title challenge this season they can afford no sloppy draws at bottom half teams, must hope Celtic drop crucial points and they must win at least 2 of the last 3 derbies. A big ask but Steven Gerrard is now fully aware of the task on his hands this season.

Rangers finally have their man. They have wanted him all summer and now with Europa Leauge Qualification, they can afford him. The Gers so desperately missed a spark on Sunday and now they have that back.

What Kent must do though, is become the £7million star man his team need him to be. Last season he was their best player but he only scored 6 times. He must up his figures this campaign. If he can, then Rangers will be in a much better place than they were 2 days ago.