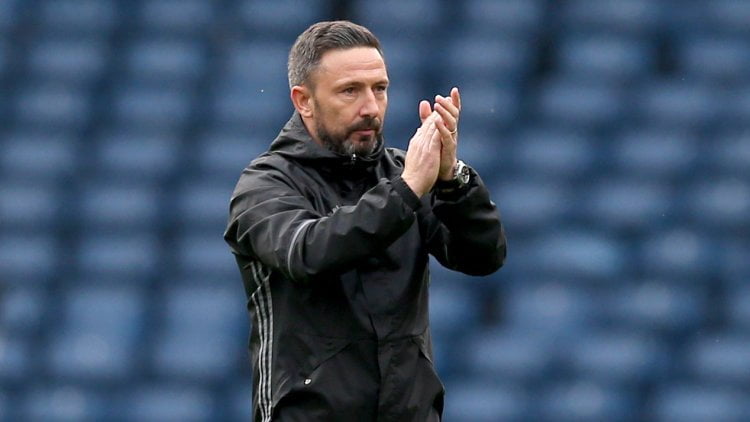 Now is the right time for Derek McInnes to end his 8 year spell as Aberdeen manager after the partnership turned sour.

But in time, the outgoing Dons boss will be remembered by fans as the club’s best manager since Sir Alex Ferguson.

When McInnes took over in 2013, the Pittodrie club had finished in the bottom half of the table four years in a row.

Within a year he led the club to their first trophy in 19 years, the Scottish League Cup, after 120 minutes and f****** penalties against Inverness at Celtic Park.

More success followed, as he steered the Dons to four consecutive 2nd place finishes and thus European football, although he never could break the duck that was the Europa League 3rd Qualifying Round.

In six seasons, Derek McInnes had taken Aberdeen to eight Semi Finals, including in 2016-17, where they lost both show piece events to Brendan Rodgers’ invincible Celtic.

However, the last few years has seen a regression in both the style of play and results under McInnes.

The Pittodrie outfit look set to finish 4th for the third year in a row, whilst they have only made one cup semi-final across the last two campaigns.

For most clubs this would be deemed a massive success, but it’s below the standards that McInnes set himself and he knew that.

McInnes-ball was never based on Pep Guardiola’s Barcelona, but there is no doubt that the team lost attacking fluency in his few years in charge.

Part of that may come down to his signings, which, in my opinion, have dropped in standard in recent seasons.

All of those international players left, most for no fee at all, whilst the replacements have been largely inadequate.

Greg Tansey, Stephen Gleeson, Craig Bryson, Stevie May and Nicky Maynard to name but a few failed to live up to expectations and have all since left the club.

Lewis Ferguson and Ross McCrorie have a huge future ahead of them and they started life together brightly with the creative Scott Wright and Ryan Hedges in front of them, but since Wrights’ move to newly crowned champions Rangers and Hedges season ending injury, the Dons have hit a wall.

They have won just one of their last nine games, scoring just one goal during that damaging spell.

Now was the right time to part ways, for both McInnes and the club.

202 win in 378 games shows the club has been transformed from a bottom half side to the most consistent outside of Glasgow.

The bar has been raised, the club is stable and the role of manager is now an exciting prospect. But who should it be?

Stephen Glass, the former Aberdeen midfielder, is the early favourite.

His ties with sister team Atlanta 2, where he has won just two of his last eleven games, could be too strong to be ignored.

Cormack always backed McInnes since his reign began but there has always been an expectation that he wants his ‘own man’ in place, and Glass fits the bill.

A fresh face such as Glass would be much welcomed in the North East, instead of a well-known one that is out of a job, such as Craig Levein, Paul Lambert or Neil Lennon.

Stephen Robinson would be a safe but not exciting pair of hands, whilst the post will come too soon for the likes of Jim Goodwin.

However, there is the fear amongst the support that Glass could be an underwhelming selection.

If experience is not an issue for Cormack then why not a brave appointment like Shaun Maloney or Darren Fletcher, former Scotland internationals currently in high coaching positions but perhaps ready to become Number 1 if the right opportunity presents itself.

Enzo Maresca, who has also been linked with the vacant Celtic job, is highly thought of and is in charge of the Manchester City development squad.

Novice managers can be successful if they are given time with the right vision and personality, just take a look at Glasgow last weekend.

Cormack will want the club to reach the next level, to ‘raise the bar’ again and the Dons have the chance here to do so, but only if the right man is brought in.

Whoever it is, they have a lot to live up to, with Derek McInnes leaving the club in much better shape than he found it.