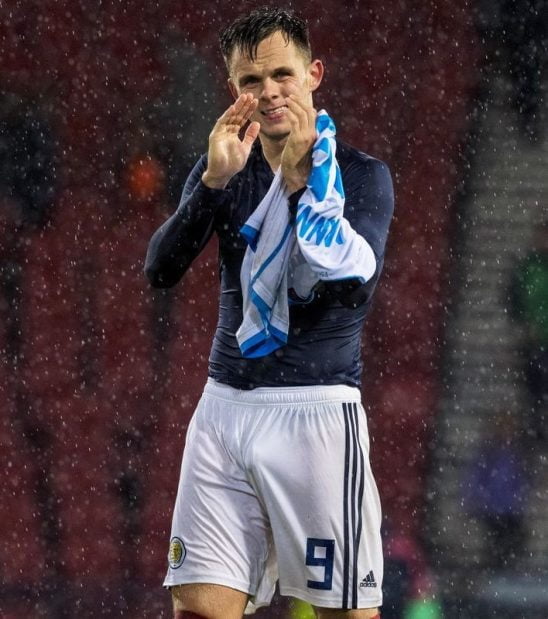 GABRIEL ANTONIAZZI: Shankland must start for Scotland against Cyprus

Steve Clarke must start Lawrence Shankland in Scotland’s next game, away to Cyprus next month, no matter what happens between then and now.

The Dundee United hit man scored on his home debut on Sunday and impressed with his link up play in both matches he featured in.

Lawrence Shankland scored on his home debut for Scotland

Scotland are not blessed with striking options with Leigh Griffiths, Scotland’s most natural finisher, far away from fitness and Steven Fletcher making himself unavailable.  Shankland represents the best natural goal scorer this country has at the moment.

Oli Burke is not an out and out Number nine and Oli McBurnie did not take the chances he was given in September. Both should hold their places in the squad, but not on the team sheet.

I actually believe that the only changes to the XI from the San Marino victory should be at centre half, if defenders Kieran Tierney, John Souttar or Scott McKenna are fit.

Every other player should keep their starting berth and even then it is harsh on Stuart Findlay, who impressed whilst earning his first cap.

Consistency is what this team must be built on and Clarke knows that. That’s what he had at Kilmarnock, to great effect. A core group of 14 or 15 players that play every single game and are well drilled, determined and hard to beat.

It’s what other so called ‘lesser nations’ that have overachieved recently always have (see: Iceland, Wales, Northern & Republic of Ireland). I believe he is getting closer to reaching that platform and once the squad is there the Tartan Army will see the fruits of Clarke’s labour on the training pitch.

Despite the 4-0 drubbing in Moscow and the subsequent fallout, this international break could prove to be a success in the long run for the manager. Clarke has cemented his midfield three of McGregor, McTominay and the excellent McGinn, so don’t expect that to change for a while.

He indicated that out wide he wants to play with one ‘out-ball’, either Fraser or Forrest and one ‘worker’, Snodgrass or Christie. The latter could see his game time increase now due to the former’s retirement. Palmer is now his first choice right back ahead of O’Donnell. And he knows that Shankland does not look out of place.

A fit Kieran Tierney would be a bonus for Steve Clarke

Yes the 6-0 win on Sunday was only against San Marino, an absolute minnow of European football, but despite the weathers best efforts to dampen the mood, the performance created a positive atmosphere at the national stadium, which is not too frequent these days.

Tougher tests are ahead and everyone knows how one poor result can undo months of hard work but the two November games are winnable and if six points are gained then the momentum will be firmly with the Scots heading into 2020 and March’s play-offs.

By then the hope is that the whole squad are singing off the same hymn sheet and a home Semi Final against Bulgaria or Israel presents a one off tie that surely Clarke’s men will be favourites for. The Final is a different ball game entirely.

Of course, the Semi Final would have to be won first, then it is 50/50 whether Scotland would be home or away for the fixture. Norway or Serbia would await, and both boast players from the top of European club football, such as Marten Odegaard and Erling Braut Haland or Dusan Tadic and Sergej Milinkovic-Savic.

But that is a possible discussion for the future. Right now, Clarke must continue to get his ideas through to the players and try and build momentum by sticking with the same team that eased past San Marino, starting with Lawrence Shankland.