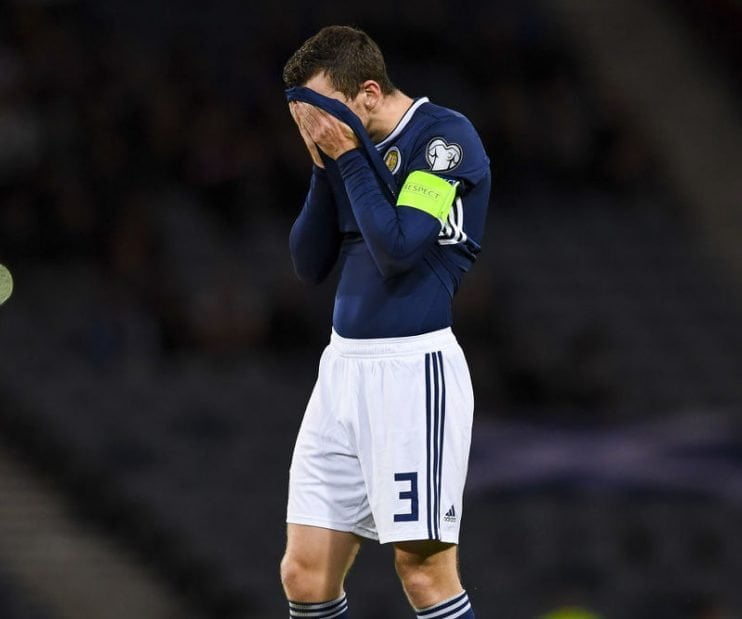 GABRIEL ANTONIAZZI: Rip everything up and start again attitude is nonsense

It has been a damning week for Steve Clarke and his players after Friday night’s 2-1 loss to Russia was coupled with last night’s hammering from a Kevin De Bruyne inspired Belgium.

However, Scotland must look forward and try and build on the few positives because looking back is torture and a waste of time.

First thing is first, you need to be realistic. Belgium are one of the best teams in the world and could tear anyone to pieces (see the first half of their World Cup Quarter Final with Brazil).

Russia have had a settled side for 3 years, have players of top international experience and ability and were a penalty kick away from the World Cup Semi Final 14 months ago. These results perhaps could have been expected.

You get a week’s training with the players. Clarke has now had two and has not been given any token friendlies to experiment with. He is the right man for the job and he needs time, no matter the result of this campaign, or even the play-off.

Scotland have not qualified for 22 years so it is not going to change overnight. Yes reaching the Euros is realistic and immediate but surely the SFA want to build a playing platform where they are regular contenders every campaign, and are ranked as one of the so called ‘second nations’ in Europe, with sides like Russia, Iceland, Sweden or Poland.

Right now they are what I would call ‘fourth ranked’- teams who never qualify but are not whipping boys or minnows. This is exactly where Wales and Northern Ireland were at the start of this decade and now they are in contention for qualification every time.

That is because their governing bodies appointed managers who they believed in and gave them time to mould their team, despite bumpy starts. Michael O’Neill was appointed in 2011 and won only 1 of his first 18 games. The rewards were not reaped until they qualified for Euro 2016, their first major tournament in 30 years.

Chris Coleman lost his first four games in charge, including a humiliating 6-1 defeat to Serbia. Wales reached the Semi Final of Euro 2016 four years later. The ‘we are rock bottom, we need to rip up everything and start again’ argument is rubbish. Patience is not wanted but it is needed.

Steve Clarke claimed there were some positives from the two games and he is right and they must be focused and built upon.

In goal, David Marshall came out of the fixtures better than he came into them, perhaps the only player to do so. Scott McTominay did not shy away from the ball in either game and is so athletic, he should be at the core of the midfield for years to come.

John McGinn scored his first ever goal for Scotland and is only on an upward trajectory. Andy Robertson is one of the best left backs in the world despite not playing as well as he can for Scotland, he admitted as much on Sunday.

Ryan Fraser showed what he can do in the first 20 minutes on Friday, there is much more to come from him. Arsenal’s Kieran Tierney will come back and likely play right full back, which has been a problem position. There is a core to build on that can deliver, if given time under Clarke’s guidance.

David Marshall was only player to earn plaudits after double header

Yes, there are still plenty of issues with the national team. The balance of the team does not yet seem right, whether that is the formation or something else, I am not sure. Number 9 remains a problem but Oli McBurnie is young and can be useful and we may see Leigh Griffiths in October.

Celtic’s stars continue to shine brighter for club than country and centre back is still the bane of whoever picks the team. Finally, there are the supporters and the stadium, or a mix of the two.

Apathy from the Scottish people is perhaps the single biggest challenge facing Steve Clarke and I am not convinced Hampden Park is the right stadium to play qualifiers in. But these problems can be solved in time.

Steve Clarke, his players and the SFA must try and block out the noise and the hysteria to focus on building an identity, becoming hard to beat and slowly seeing results on the pitch improve.