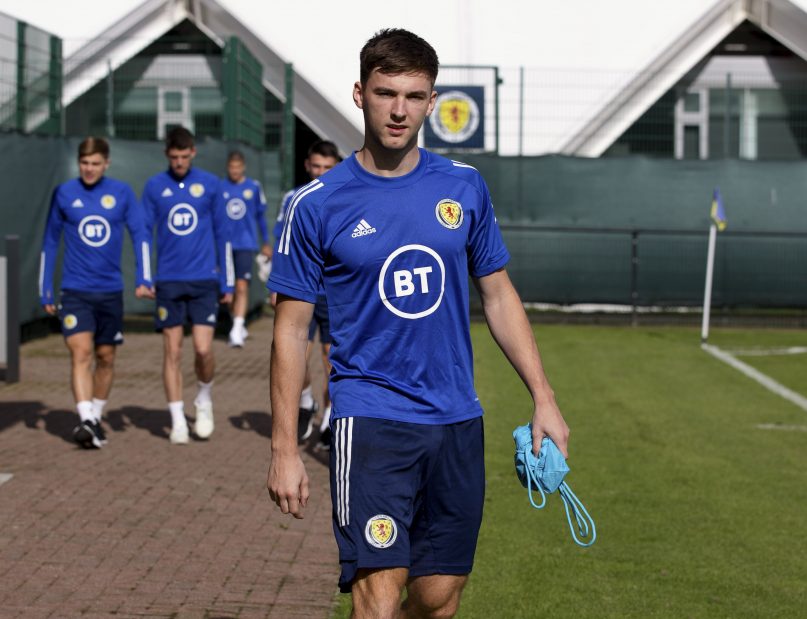 GABRIEL ANTONIAZZI: Tierney must play centre back for Scotland to succeed

Kieran Tierney must play centre-half for Scotland in this week’s Nations League ties, with the inclusion and positioning of the Arsenal defender vital to the nation’s hopes.

Steve Clarke hasn’t picked a starting eleven for 10 months and this one will be the most important of his Scotland reign so far.

It could be argued the two best left backs in the UK are both Scottish – with Andy Robertson lapping up the plaudits after three trophy laden seasons at Liverpool.

Arsenal star Kieran Tierney struggled with injuries after making the £25 million move from Celtic last summer but after several bouts on the side-lines, he has excelled in the centre of defence.

Under Mikel Arteta, the former Parkhead hero has played left of a back three in a rejuvenated Gunners side after they returned from lockdown.

Tierney starred in a string of impressive results including two wins over champions Liverpool as well as victories against Manchester City and Chelsea, en route to FA Cup glory.

The left back has shown his impressive defensive capabilities and well-known leadership skills but also the ability to create from deep, with his long range passing putting in Pierre- Emerick Aubameyang for crucial goals against Manchester City and Chelsea.

He hasn’t played for the national team since 2018, and under Alex McLeish he was often fielded as a right back, which didn’t play to his strengths.

The idea of Tierney at left back with Andy Robertson further forward has also been mooted but for me the Liverpool man must play as the Number 3.

The former Queens Park star is the best left sided defender in the world right now and it’s vital he maintains that spot for Scotland.

The best Steve Clarke can do is play Tierney as his left sided centre half, alongside Liam Cooper or Scott McKenna, against Israel and the Czech Republic.

Elsewhere, expect to see the three Mc’s, McGinn, McGregor and McTominay in the middle of the park, Scotland’s strongest area.

Celtic duo Ryan Christie and James Forrest both impressed last year for the national team as inverted wingers and with no Ryan Fraser, these two are likely to play, if Clarke does go with a 4-3-3.

Then comes the striker conundrum.

Leigh Griffiths is still absent and Steven Naismith is ageing, whilst first choice Oli McBurnie pulled out over the weekend with an injury.

The forward has taken plenty of flak from the Tartan Army, whether it be his lack of goals or the way he wears his shin-pads.

But as the manager said last week, he is underappreciated by many the fans and his work often flies under the radar.

He only notched six goals in his debut campaign for the Blades but after football’s resumption he was a stand-out performer.

Scotland’s most dangerous players come from midfield and if McBurnie can do the dirty work for the rest of the team, the goals will come from elsewhere (and hopefully he’ll bag a few on the way), albeit not this month.

Someone who could fit the mould of striker that Steve Clarke wants is Lyndon Dykes, who’s inclusion was met with some scepticism and the Australian born forward does deserves his chance, although he wouldn’t be my first choice.

Callum Paterson is never a striker so that leaves Oli Burke as the man that should start up top, even if it is just a short term solution for September.

Burke is more of a natural wide man but he has the physical attributes to hold the ball up, win headers and stretch the defence when needed and because of the abilities he should always be in the squad.

With eight games in the next two months and almost a full list of players to choose from, these upcoming fixtures present Clarke with the extra training time he has longed for and the ability to mould the team into his image, as they aim for Euro 202…..1?