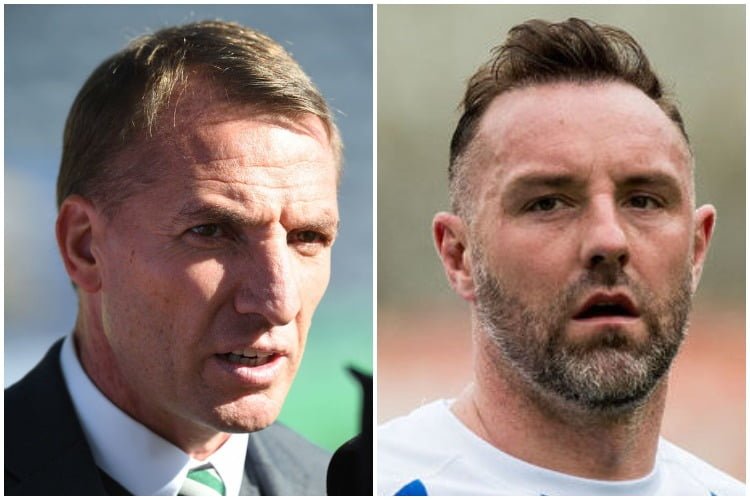 Brendan Rodgers has told Kris Boyd to “concentrate on getting into the Kilmarnock” team after the striker claimed there was a split in the Celtic dressing room.

Celtic fell to a 2-1 defeat against Kilmarnock on Sunday – their second loss of the season – leaving them six points off top spot.

But the Hoops boss, speaking ahead of tomorrow night’s Betfred Cup clash with St Johnstone, insisted his side are “unified” and “very much together.”

He said: “When teams lose games the logic used to be and clearly still is, there is a split in the dressing room.

“Sometimes there is no plan B – that is another accusation. For us, we are very much unified as a club.

“Yes, we haven’t started as well as we wanted in our season but we are very much together.

“Kris is probably best suited trying to get himself into the Kilmarnock team to get playing and we will concentrate on our own job in here.”

The Parkhead boss is expecting different St Johnstone after they were hammered 5-1 by Rangers in the league at the weekend.

The Irishman said: “It’s always been tough games against Tommy Wright’s team and we go there looking to respond after the weekend.”

“We’re not happy losing games but we’ll get back again, working hard.

“Our logic is very clear. We have a clear way of working and a clear way we want to win.”

“At the moment we’re maybe short on our variety of play. But it’s my responsibility to take the team back to that.

“I told the players I’ve been so impressed with level of intensity in training. It doesn’t guarantee results but it gives you a great chance.”

The ex-Liverpool manage admitted the blame for Celtic’s poor start to the season lies directly at his door.

But while he is going through his toughest spell as Hoops boss, he has no intention of downing tools.

He said: “I take full responsibility for our 2 defeats. I made big changes for those games. Perhaps I made too many.

“I’m looking forward to the next stage of the season to show our fighting qualities.”