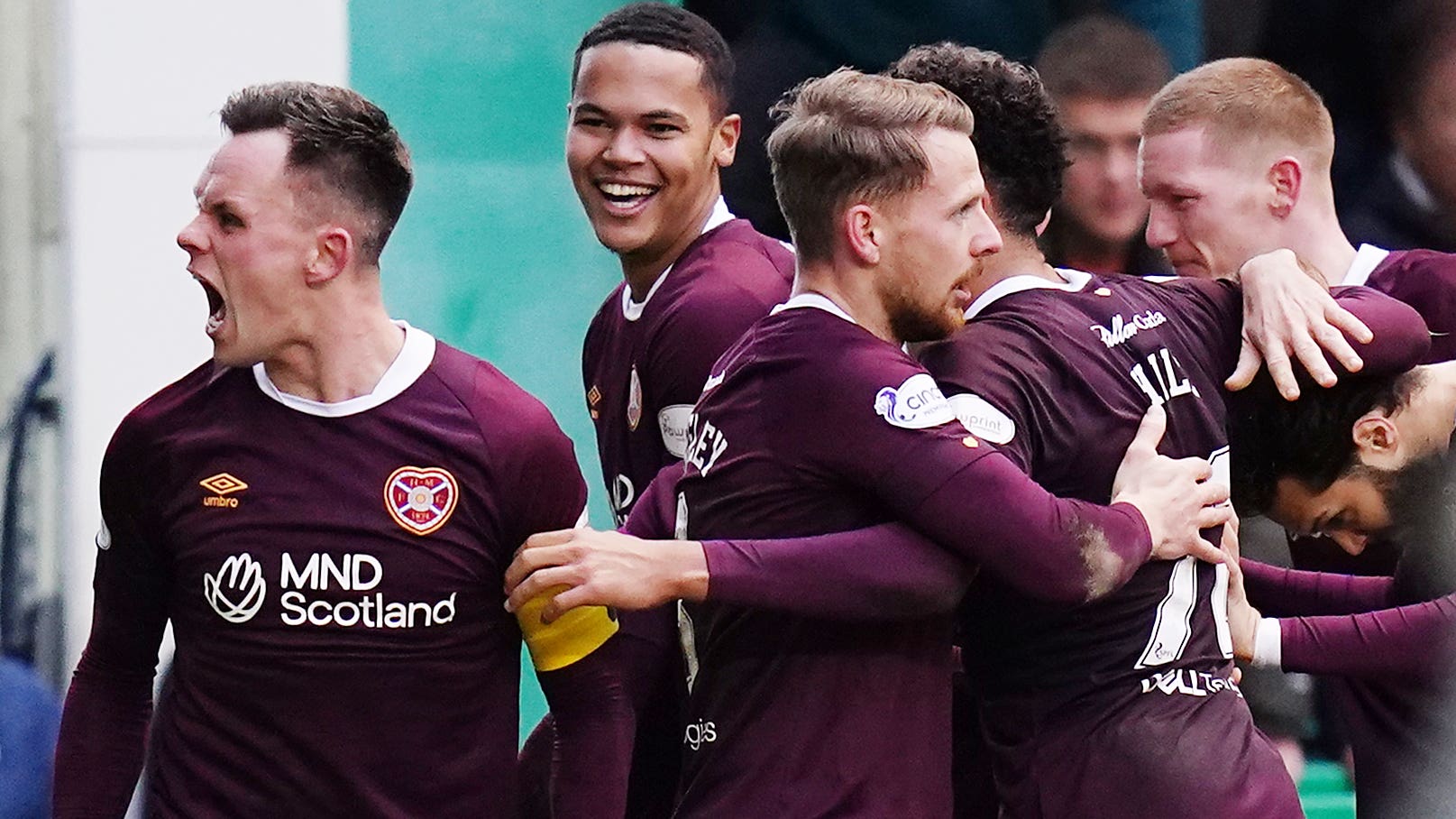 By By Anthony Brown PAJanuary 22, 2023No Comments

Lawrence Shankland hit his 20th goal of the season – before being sent off in stoppage time – as rampant Hearts moved into the fifth round of the Scottish Cup with their second 3-0 win over Edinburgh rivals Hibernian this month.

Three weeks after romping to victory over the Hibees in the league at Tynecastle, Robbie Neilson’s side did so again across the city at Easter Road through goals from Josh Ginnelly, Shankland and Toby Sibbick.

Shankland’s 72nd-minute strike – which knocked the stuffing out of a spirited Hibs side – meant he became the first Hearts player to hit 20 goals in a campaign since John Robertson in 1991-92. However, the shine was slightly taken off the Jambos captain’s day when a foul on Rocky Bushiri earned him a second yellow card.

Hibs made three changes to the side that started last weekend’s 2-2 draw with Dundee United as new signing James Jeggo, Marijan Cabraja and Chris Cadden took over from Will Fish, Kyle Magennis and the suspended Joe Newell.

Hibs started strongly and threatened in the fourth minute when Ryan Porteous’s through ball sent Elie Youan racing towards goal and Hearts wing-back Michael Smith almost turned it into his own net as he slid in to knock it behind.

From the resulting corner, which goalkeeper Zander Clark dropped, hooked the ball over the bar from 10 yards out.

The Hibees were desperately unfortunate not to go ahead in the sixth minute when Josh Campbell flicked an Aiden McGeady cross off the post from close range.

Two minutes later, Shankland had his side’s first attempt of the match after spinning on to Alex Cochrane’s throw-in but his strike from 25 yards out ran harmlessly wide.

The Jambos went ahead in the 10th minute when Ginnelly pounced to rasp in a ferocious low strike from 12 yards out after Robert Snodgrass’ inswinging free-kick from the right was only partially cleared by the Hibs defence.

Despite being a goal behind, the hosts continued to look the more threatening side and McGeady almost conjured an equaliser in the 21st minute when he drove into the Hearts box and saw his angled shot beaten behind by Clark.

McGeady then cut in from the left and crossed to the back post, where Campbell headed agonisingly wide.

Hearts had a good chance to double their lead in the 35th when Cochrane squared the ball across the box to his fellow wing-back Smith but the Northern Irishman’s low left-footed shot was well saved by David Marshall.

At the other end, Chris Cadden saw a powerful goal-bound shot from inside the box charged down by James Hill as Hibs tried to find the equaliser their first-half play would have merited.

Shankland then pinged a speculative effort just wide from 25 yards a minute before the break.

The Hearts skipper threatened with a couple of strikes from outside the box in the early stages of the second half.

Hibs remained a threat though and Cadden had a fierce drive from the edge of the 18-yard area pushed away by Clark in the 61st minute.

Hearts eventually put daylight between the teams in the 72nd minute when Shankland thumped in an emphatic low finish from just inside the box after playing a one-two with substitute Stephen Humphrys.

Shankland’s afternoon ended on a sour note when he was shown a second yellow for a stoppage-time foul on Bushiri, but 10-man Hearts still managed to add a third when centre-back Sibbick raced onto a through ball from Humphrys and chipped the ball beyond Marshall.