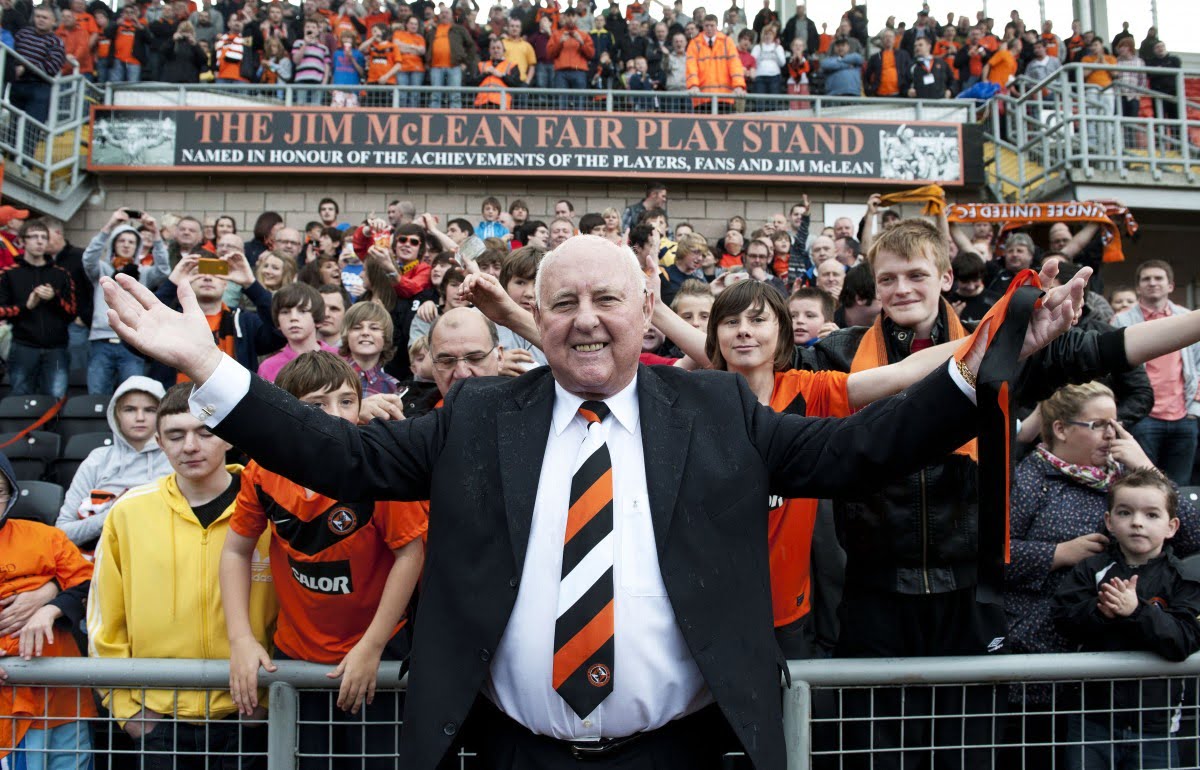 PETER MARTIN: One day at Tannadice

ONE DAY AT TANNADICE

How do you pay tribute to Jim McLean without rolling out a list of honours, achievements and great games involving his beloved Dundee United?

I can only offer you my personal experience of watching his teams and meeting him in the mid 90’s when he had moved upstairs to the boardroom at Tannadice after 22 years guiding the unfashionable United to heights that even Disney wouldn’t have accepted in a script for a movie.

I was working at STV at the time and had somehow managed to organise Mr McLean to sit down and chat football in the boardroom at Tannadice.

I called a number of United players that I knew to give me a little insight into the great man and what to expect.

My friend Jim McInally was a great wind-up merchant, and by the time I hit the doors at Tannadice, I was like a coiled spring from all the nonsense he had filled my head with about wee Jim.

I was nervous and felt like a schoolboy reporting to the headmaster as I was guided upstairs to the boardroom. Contrary to popular belief, Mr McLean greeted me with a huge smile and a warm handshake.

He didn’t know me from Adam and I was in awe of the great man.

I was brought up in a household where I was taught to appreciate two teams on the park. A rarity, I have to admit in the madness of Lanarkshire in my youth.

Tannadice, like Pittodrie in the eighties, was a place where I used to travel to with fellow Celtic fans hoping for a win, but more than happy if you got a draw.

United were a good side Gough, Narey, Hegarty, Bannon and the jewel in the crown, Paul Sturrock. ‘Luggy’ was one of my favourite players from all the other Scottish teams in the 1980’s.

Back to Mr McLean. Setting up the camera and the sound for the interview can always be an uneasy experience if you have someone with not a lot to say and working to a time limit. That was not the case with Jim McLean.

Jim took me on a tour of Tannadice and talked me through some of the photos on the wall and spoke with great pride about United, the players and their achievements. By the time I sat down to chat with him on camera all my nerves had gone.

He was a football man, and in my mind one of the great Scottish managers of all time and someone we should be proud of.

In subsequent years, I interviewed many of the players who played under him.

There was no doubting his coaching abilities, but some of his man management skills were undoubtedly questionable and many of the great players he managed did not sugar coat their recollections of some of the madness he adopted to try and take them to greater heights.

I’m not sure anyone could really sum up Jim McLean better as a person than possibly his wife Doris, his sons and maybe a very select few from the footballing world.

In my opinion, from that one day at Tannadice, I chatted with a warm, engaging, living legend.

He made me feel as if I had won a golden ticket in the raffle to meet and chat with him.

It is a day I will never forget, as well as a team that will live long in the memory.