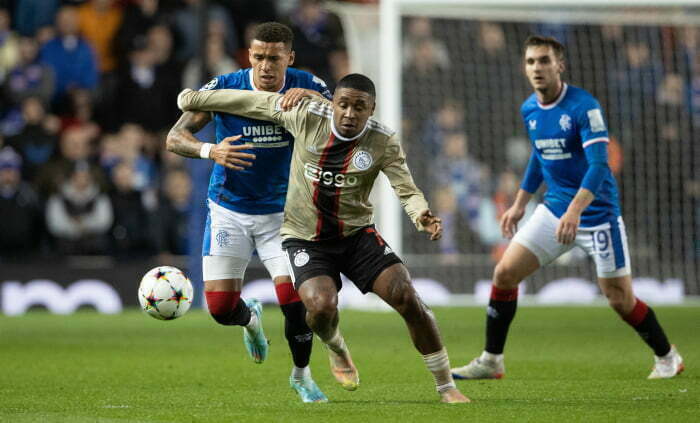 By Cheryl SmithNovember 1, 2022No Comments

Ajax took a 2-0 lead into the break after a dominant first half saw goals from Steven Berghuis and Mohammed Kudus put the Dutch in a commanding position.

Fashion Sakala came closest for the home side in the first 45 minutes, but his back post header was cleared off of the line by Calvin Bassey.

Mohammed Kudus fired in his second of the night on the 55th minute before the goal was ruled out by VAR for an offside.

The Gers midfielder hit a volley from outside the box, only to see it tipped over the bar by Ajax keeper Pasveer.

Alfredo Morelos missed a huge chance to pull one back for Rangers after a mistake from the Ajax goalkeeper led to an open goal, but the Colombian could only lash the ball wide.

Just a few seconds later the Ibrox side did find the back of the net from the penalty spot.

Rabbi Motondo was hauled down in the box, with Gers skipper James Tavernier converting from the spot to make it 2-1.

But just 44 seconds later substitute Francisco Conceição restores Ajax’s two goal lead as he hammers the ball past Allan McGregor to make it 3-1.

The win for Ajax sealed third spot and Europa League football for the Dutch side.

Rangers will have to come again after a disappointing European campaign which sees the Ibrox club finish bottom of Group A on zero points from six group games.