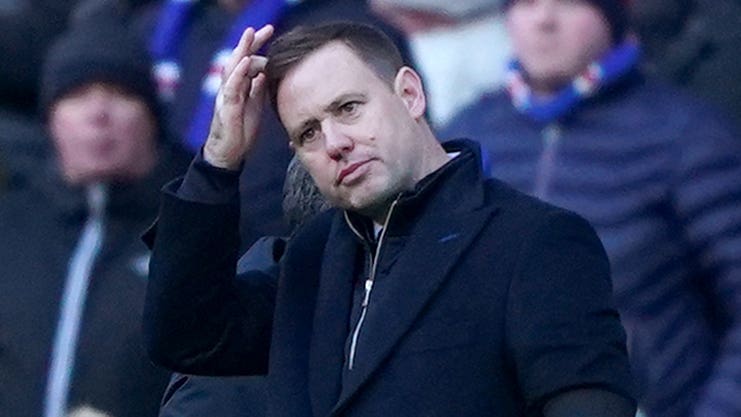 By By Ronnie Esplin PAJanuary 2, 2023No Comments

Rangers boss Michael Beale believes the cinch Premiership title is Celtic’s “to throw away” after the 2-2 draw at Ibrox kept them nine points clear at the top.

Daizen Maeda opened the scoring for the visitors in the fifth minute but the Light Blues fought back through a Ryan Kent strike and a James Tavernier penalty after the break.

However, Kyogo Furuhashi equalised in the 87th minute to preserve the Hoops’ commanding lead in the title race.

It was the first time in five games that former Rangers assistant coach Beale had failed to land all three points since returning to the club from QPR and he spoke about regrets – such as Malik Tillman’s blocked shot at 2-1 and the two conceded goals – while analysing title hopes.

“We should do better. We are the home team and, as a group, when I worked with them previously, they pride themselves on clean sheets. That is the third time we have let in two goals, so we are going to have to improve on that.

“Certainly in big games at home, I am not sure we are going to be able to let in two goals, and not two the way that we did.

“That might seem harsh on the team but that is the reality. We did a lot of good things. We are no further away than we were five games ago.

“The points are the same. There’s 18 games to play. It is Celtic’s to throw away in terms of the league but in terms of our mentality and where we are, I think we are one or two steps ahead than we were a few weeks ago but we need to be 10 more.

“I thought in terms of where we are at, that’s the best performance since I came here.

“We were very unfortunate not to win the game. I wouldn’t say we were clearly the better team so a draw to some people’s eyes might be fair also.”

The former QPR boss keenly awaits the return of a number of injured players while looking for new recruits in the transfer window who will be more than a short-term fix.

He said: “I definitely want to bring in players but they’ve got to be the right players.

“If we can add two or three more to it then we could have a second team as good as the first team that was out there today, then it’s game on inside the building.

“You have to earn your shirt. I think the last few weeks, people have played regardless.

“Celtic are a very good team. All of their players are not top and all of ours are not rubbish – that’s not right.

“Two good teams played a game of football today. We’ve got good players, they have to show themselves in the best light collectively and individually.

“Then we need the players who have been injured back fit and in and around this squad. Then you can see the true value. This month will be a big month, sorting out one or two players’ futures, tying one or two things up.

“I don’t want short term until the end of the season because there is no point, to appease myself or fans. We need people to come in that will be big players for Rangers in the next two or three years.

“They don’t just grow on trees. With this game out the way now it gives me time to get into that. There is some people I have got in mind.”