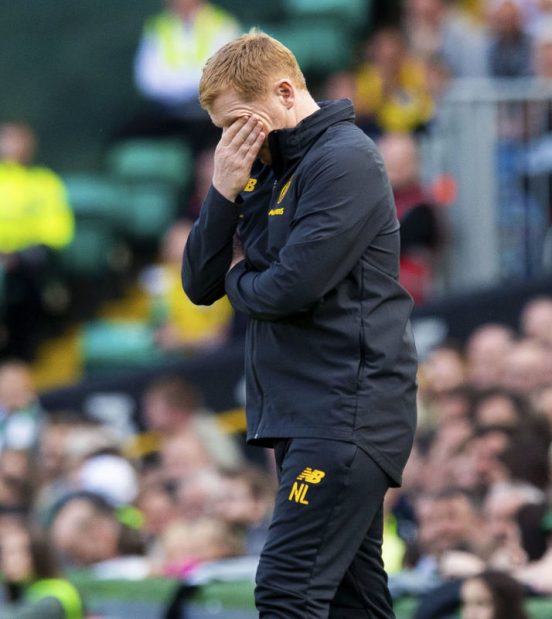 GABRIEL ANTONIAZZI: Is there trouble in Paradise after Cluj nightmare?

IT has been a bad week at Celtic Park. The club were knocked out of the Champions League by CFR Cluj from Romania, required extra time to squeeze past Dunfermline in the League Cup and haven’t re-invested any of that Kieran Tierney money.

Some Celtic fans have gone viral online with criticisms of the club, many more have complained in varying forms of severity on social media and some were seen throwing their season tickets away at the weekend. It appears there is lingering, if not growing, discontent from a section of the fan base, but are they right to feel this way?

Supporters of Celtic were left outraged by Celtic’s elimination from Europe’s premier club competition last week. The 3rd round of qualifying was their stumbling block last year to AEK Athens, so Cluj did feel like deja-vu.

There is some premise for that anger. Scotland’s co-efficient is 11 places above Romania, and the Romanian champions are ranked 288th in Europe. Their national team hasn’t played at a World Cup since Scotland played at France ’98 (although they did play in Euro 2016).

However, it wasn’t the level of the opponents that annoyed Neil Lennon, but the manner of the defeat. Twice leading, twice letting it slip in the second half. Where was the tactical change to protect the lead from the management or the leadership on the pitch to keep it tight for the last fifteen minutes?

It was head in hands moment for Hoops winger Mikey Johnston

Neil Lennon must also take some blame for his decision to start Celtic’s Player of the Season and most influential midfielder Callum McGregor at left back. Brendan Rodgers tried it at Ibrox on the 29th of December last year and it backfired. It did again and that was all on the manager, even if he didn’t think it affected the result.

Then came Dunfermline on Saturday. Having won their two previous domestic games at an aggregate of 12-2, many home fans were expecting a demolition of lower league opposition, especially after seeing a strong XI.

Celtic have dropped into the Europa League after Cluj defeat

A quick look at the stats – 33 shots for the home side compared to 3 for the away – with the only one on target ending up in the net and you would be forgiven for thinking it was an easy win. But the Pars kept it tight, as you would expect, and put in an impressive defensive display. The game was won but just.

Finally comes the (apparent) underwhelming performance in the transfer market from the board. Celtic have spent £12m on three players but only Hatem Abd Elhamed has been given widespread approval. Christopher Jullien is a £7m centre-half but cannot get into the team.

The Hoops were ahead twice in the Champions League tie

It is quite clear the Boli Bolingoli-Mbomo is not ready to start at left back following the exit of Kieran Tierney.
It’s believed both Jullien and Bolingoli were targets under Brendan Rodgers but he thought the former was pricey and the latter was not good enough.

Whether Neil Lennon fancies them in the long run remains to be seen as it seems he didn’t identify them. Another left back must be signed and I do not know why Birger Meling of Rosenborg, who has impressed over the last three seasons against Celtic, was not instantly lined up as a replacement for the Kieran Tierney.

I would be surprised if Greg Taylor does not come in and he is fine for the short term but is he the level of player Celtic want to be signing? Jordon Ibe could join but another winger is not the priority. This is because nowhere near enough players have left.

Fans displayed banner slamming the Celtic board on Saturday

The Scottish Champions, in similar fashion to Manchester United, have a huge squad with players on high wages who do not play. Scott Sinclair is one of the highest players at the club and Neil Lennon doesn’t rate him. Eboue Kouassi never plays. Jack Hendry wants out. Has anyone seen Bayo kick a ball? Daniel Arzani and Marian Shved are two highly rated young attackers but they cannot get near the team. Question marks remain over Olivier Ntcham and Tom Rogic’s long term commitment to the club and Celtic still want to continue to bring through youngsters, such as Ewan Henderson and Karamoko Dembele. Currently, there is just no space. This transfer market could have been dealt with much better, especially considering the high sale of Kieran Tierney.

Now, the rant is over. Thankfully the Parkhead faithful know it is not all doom and gloom and here is why. I would be astonished if Celtic do not win the league this season. They are the best team in the country, comfortably.

When fans were complaining outside of the stadium last week they were quickly reminded by rival supporters that winning nine domestic trophies in a row is unheard of. Rangers, Hibs and Hearts have all been in lower leagues in the last few years. Aberdeen have won one trophy in my lifetime.

Thousands upon thousands of fans support clubs that cannot even afford to sign players unless it is a free transfer. Celtic are currently top of the league. In their opening 8 games they have scored 28 goals. Even in defeat to Cluj, they looked electric going forward in the second half.

Ryan Christie is in the form of his life and it looks like he could make it right to the very top. The same can be said for Kris Ajer. Callum McGregor and James Forrest were the best two players in the league last season and Odsonne Edouard has more ability than anyone else in the division.

Ryan Christie has started season on fire for Celtic

Celtic have won 28 cup games in a row and anyone who has played any form of football knows that progression in a knockout tournament is all that matters, even if it requires extra time at home against Dunfermline. Lennon said last week that they have the gravitas of a Champions League club and in terms of stature and history they do but not on the field right now.

They are a Europa League team, that is their correct level. Look at the teams who have won it recently: Sevilla, Manchester United, Atletico Madrid, Chelsea. These sides would murder Celtic. If the club were to reach Champions League group stages it would be an over achievement as the qualifying system is geared against teams from smaller nations.

There are undoubted issues in the team that need addressing, namely at full back but with one or two additions before the window is out they will remain in their position of extreme strength. There is no reason for Celtic fans to panic but more reason for them to have a reality check.

They are no longer a Champions League team but they are one that can continue to dominate the SPFL for years to come. European football after Christmas is not necessary but a bonus. For both Old Firm clubs their bread and butter is the league and it should be the main aim.

Celtic fans need to stop this ridiculous obsession with ‘The Ten’. They have not even won 9 yet and they do not have a divine right to win the league, as Rangers, who are evidently improving, are proving this season. The league will be closer than before this campaign and Celtic supporters should not take their dominance for granted but treasure the opportunity to win a record equalling ninth title in a row.