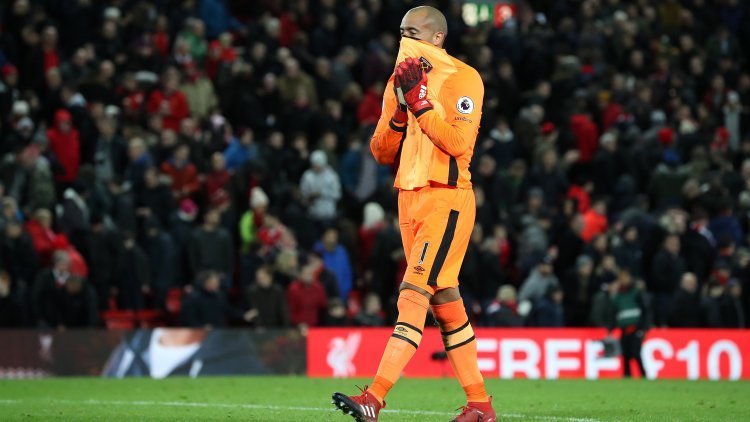 11 Dec No saving grace for Randolph

Posted at 21:03h in Uncategorized by Peter Martin 0 Comments
0 Likes

Darren Randolph did not feel his crucial save in West Ham’s 2-2 draw with Liverpool at Anfield made up for his error which led to the home side’s equaliser.

The Republic of Ireland international dropped the ball at Divock Origi’s feet early in the second half with the Belgian equalising after the Hammers led 2-1 at the break.

Adam Lallana had put Liverpool ahead inside five minutes but under-fire goalkeeper Loris Karius failed to get across to Dimitri Payet’s free-kick and Michail Antonio gave the visitors the lead when he capitalised on some slack defending to slot home.

Liverpool dominated for much of the remainder of the contest after drawing level three minutes after the break, but could not find a winner as Randolph pulled off a fine stop to keep out Jordan Henderson’s long-range effort.

“We’d managed to get ourselves ahead in the game – I was a bit disappointed,” Randolph told Sky Sports when asked about Liverpool’s second goal.

Asked if his later save made up for that error, he added: “I t does not really matter. It’s one of those things that happened, move on.”

The result took West Ham out of the bottom three and Antonio is looking for the side to kick on and climb the Premier League table.

“We just need to keep pushing on,” he said.

“It’s massive, we’re playing to get out of the situation we’re in.

“In the week hopefully (we will) get away from the situation we’re in.

“It’s a massive show of character and shows that we’ve got the right players to do it.”

Jurgen Klopp refused to lay the blame for West Ham’s first goal squarely at Karius’ feet after the keeper had got a hand to Payet’s effort but failed to keep it out.

And the German manager felt bad luck had prevented his side from winning rather than any lack of endeavour.

“We tried everything,” he said.

“The (West Ham) goals – one is a wonderful free-kick and one we were very unlucky – they were a big surprise for everybody.

“We should have had more, we tried everything.

“It’s a draw, we have to take it; it felt like we were the whole time in their box.

“We are still a really good football-playing side.”

West Ham boss Slaven Bilic immediately turned his focus to Wednesday’s game against Burnley, with fellow strugglers Hull and Swansea then following in what looks a crucial run of games for the Hammers.

“We have a couple of games we have to win that can get us into a more comfortable position,” said Bilic.

“It’s going to be a difficult couple of games and we have to show our quality. We’re going to be ready for Burnley on Wednesday.”