A Major and a Maestro

By Peter MartinOctober 26, 2015No Comments 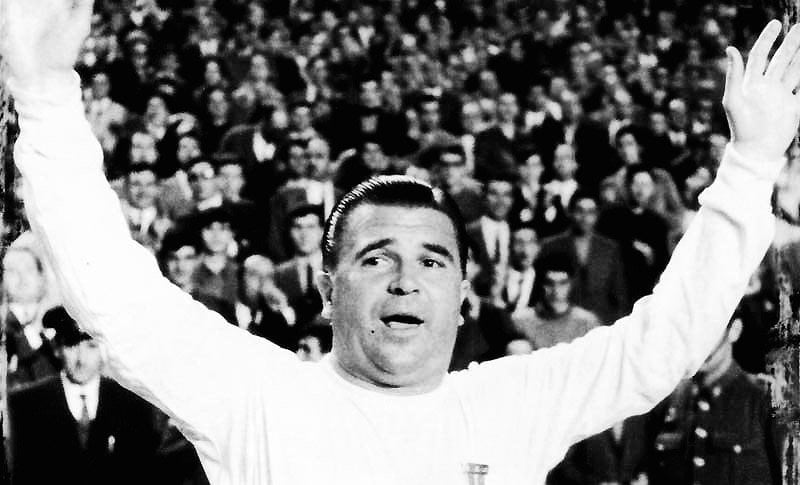 A MAJOR AND A MAESTRO BY HUGH MACDONALD

What is the best match played at Hampden during your lifetime?

The answer for me is indisputably the 1960 European Cup final between Eintracht Frankfurt and Real Madrid. It finished 7-3 to Madrid, with presumably defences on top. The names of the Real goal scorers alone testify to its greatness: Ferenc Puskas (4), Alfredo Di Stefano (3). I was not at the match, seemingly the only Scot of my era who was not there. The attendance was 130,000 but in years of frequenting bars and stands I have personally spoken to 543,641 punters (and counting) who claimed to have witnessed the match in the flesh.

My impressions of Real’s fifth consecutive European Cup victory are constrained in that they come from viewing the match on film. The action can seem slow by modern standards, the goalkeeping somewhat, er, flawed. But genius shines on down the ages. It is impossible to look at Di Stefano, Puskas, Gento and others and not be thrilled by their technique and dynamism. Memories of Puskas have been stimulated this week by the publication of a marvellous biography. The writer, Gyorgy Szollosi, reminded an audience at the Scottish Football Museum at Hampden that Puskas regarded the defeat of Eintracht as his greatest match in a club shirt. But the match had a more profound influence. It was shown on television to more than 100 million viewers. Hampden was thus the studio for the presentation of football to the wider world.

The nation that had in the previous century invented the passing game now saw it played to almost perfection. The match, too, had a profound influence on the style of Sir Alex Ferguson and Jock Stein. Their teams were later sent out to imitate Real in their pace and determination to attack. Stein, too, invited Real to play his excellent Hibernian side in 1964 at Easter Road. Hibs won 2-0 with Willie Hamilton, the great if fatally flawed midfielder, dominating the match.

It was the only defeat for Puskas in six visits to Scotland. But his ultimate triumph was that he not only entertained and enthralled us but that he informed us too. He kicked off the 1960s in style. It was a decade in which Scots who had watched the great man took his lessons on to European fields and excelled. The 1960 final was important for more than Ferenc. It was the crucible for an age of Scottish excellence. When will we see their likes again?