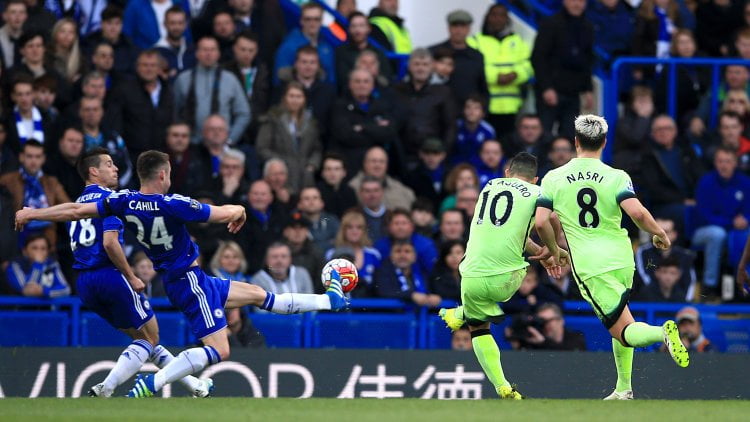 Sergio Aguero scored a hat-trick and Kevin De Bruyne starred on his return to Stamford Bridge as Manchester City defeated 10-man Chelsea 3-0 to climb to third in the Barclays Premier League.

This was a match between last season’s top two – but both have fallen from grace since last August, and both managers here knew they would be looking for work in the summer.

But the visitors appeared buoyant, with a first Champions League semi-final in the bag, and two breakaway goals and a late penalty from Aguero – Thibaut Courtois sent off after conceding the spot-kick with a foul on Fernandinho – kept City on course to achieve their revised goal of a top-four finish.

City’s title challenge petered out spectacularly during the two-month injury-enforced absence of big-money signing De Bruyne, who made just three league appearances during an unhappy two-year stint with the Blues but returned to west London as a key man for Manuel Pellegrini’s side.

The Belgium midfielder was involved from the start, getting in behind the Chelsea defence before crossing for Aguero, whose shot was blocked behind for a corner.

Guus Hiddink’s Chelsea almost took the lead five minutes in as a long ball was left by the City defence, allowing Diego Costa to take control and tee up Pedro, but Nicolas Otamendi recovered to hook off the line.

The busy De Bruyne then tested Courtois with a low drive and, with both defences looking nervous, Costa had the ball in the net after Pedro latched onto the ball as Jesus Navas dallied, but the Spain striker was flagged offside.

After a subdued spell, Ruben Loftus-Cheek turned Otamendi before firing a shot across Joe Hart, the England goalkeeper making a fingertip save but earning a goal-kick as referee Mike Dean missed the contact.

De Bruyne passed up a superb chance at the midway point of the first half, breaking on to Yaya Toure’s pass only to see his shot turned behind by Courtois.

The Belgium goalkeeper was on hand again moments later to keep out Samir Nasri’s effort after a slide-rule ball from Aguero had put him through.

But he was powerless to stop Aguero opening the scoring just after the half-hour mark as he and De Bruyne broke forward from a Chelsea corner, with the former Blues man playing the perfect pass for Aguero to finish for his 19th league goal of the campaign.

Only a brilliant last-ditch challenge from Gary Cahill prevented Aguero pulling the trigger again following another smart exchange with the live-wire De Bruyne.

The second half saw City again exert their control on the game early on, once more breaking at pace and inevitably it was De Bruyne leading the charge.

He nipped the ball passed Cesc Fabregas before freeing Nasri, whose pinpoint pass allowed Aguero to convert his second of the afternoon.

Chelsea’s poor evening continued as Courtois was sent off for bringing down a marauding Fernandinho inside the box, with Asmir Begovic coming on just in time to be sent the wrong way from the penalty spot by Aguero.

The Argentinian was soon replaced by Kelechi Iheanacho as Pellegrini wrapped him in cotton wool with bigger games coming up – but by that point City had eased to three points to move third in the table and leave Chelsea with one win from their last seven outings.