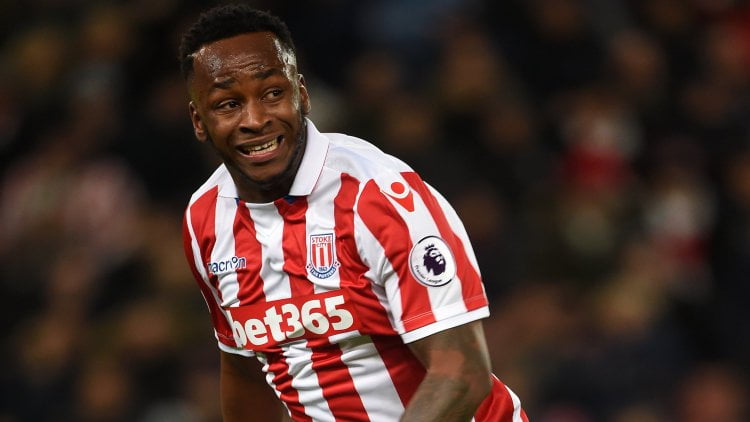 The Daily Mail has reported Berahino tested positive for a recreational drug during his time at the Baggies and both clubs have said he was banned, although have stopped short of saying exactly why.

Berahino signed for Stoke for an initial £12million last month after completing the ban. He was suspended following West Brom’s 1-1 draw against Sunderland on October 1 and was not available again until a trip to Chelsea on December 11.

During that time Pulis and Albion consistently maintained Berahino was unfit.

He made his Stoke debut in Wednesday’s 1-1 draw against Everton and could face his former club when the Potters travel to the Baggies on Saturday.

Hughes, speaking at a press conference covered by the club’s website, www.stokecityfc.com, said: “We are aware of it clearly – there was an FA disciplinary matter and Saido had an eight-week suspension, I believe. We were aware of that before we signed him.

“In terms of more detail you would probably need to refer back to his former club. We aren’t in a position to give any more details as we don’t have them.

“He had issues at his previous club for 18 months, which this is obviously a part of.

“As with all players we did our research on him before we signed him, but that didn’t change our thinking at all.

“We are pleased with what he is producing and he is looking forward to the game tomorrow.”

It is reported the former England Under-21 international tested positive for a banned substance during an out-of-competition test in September.

West Brom boss Pulis added: “He served a ban when he was here at West Brom. I don’t want to comment on the reason why.

“Saido never played for me, or didn’t play regularly for me, because he was not fit enough for whatever reason.

“As far as I’m concerned, when he went two weeks ago, Stoke City were aware (of the ban). This club has been open and honest with everything they have done with Saido.

“What has gone has gone, people make mistakes and I’m not going to condone anyone who has made mistakes, certainly not Saido. The reason Saido didn’t play for me because he was not fit enough.

“This football club was absolutely fantastic towards Saido, in lots of ways, not just over that short period.

“Ever since I have been at this club, they have looked after their players and Saido more than most has really been looked after.

“Saido is no longer a West Brom player, he’s with a former club of mine who I have tremendous respect for. I think it’s much better they deal with this situation from where they are, having just signed him.”

Pulis also defended why the ban was not previously made public.

“It was a personal matter and we’re under strict obligations not to release any of that information. That’s an FA directive,” he added.

The Football Association has declined to comment on the matter.

Berahino’s career stalled at West Brom after a potential move to Tottenham collapsed in 2015, when he threatened to strike after Albion rejected three bids, but Hughes has no issues playing the forward.

Hughes said: “Why wouldn’t I play him? He is in line to be involved. He came on to good effect on Wednesday and there is no reason why he shouldn’t be involved tomorrow.

“He is itching to play a part, although the way the game is going will determine whether he comes on. Most opposition players get some stick, and he will get some I am sure, but he is of the view that he is probably used to having some stick from West Brom supporters.

“We have brought in a player with great ability, of a good age who hasn’t reached his peak yet. He still has a lot of development to come, and we feel that what we can offer him here, it will benefit him.

“He will prosper here, I am sure of that and that is why we chased him for so long. The next three or four years are going to be really important for him, and for us. He wants to improve.”